By Joi-Marie McKenzie · Updated December 6, 2020
The Writers Room is a series that highlights writers in television and film, who are making waves and creating projects that are built on inclusivity and visibility. Who would’ve thought that after Tarell Alvin McCraney earned an Oscar award for his beautiful film, Moonlight, he’d start penning a film about the NBA? But High Flying Bird is one of the most buzzy films, starring Selma’s Andre Holland and Atlanta’s Zazie Beetz, streaming on Netflix right now. It stars Holland as Ray Burke, an agent desperately trying to cater and coddle his players during an NBA lockout. But when Burke hatches a plan — don’t worry, we won’t spoil it — to turn the power structure on its head, he risks it all. McCraney told ESSENCE he was inspired to write the film after talking about “the history of basketball” with Holland and Oscar-winning director Steven Soderbergh. He later picked up Harry Edwards’ The Revolt of the Black Athlete, which delves into how sports is steeped in racism and double standards. 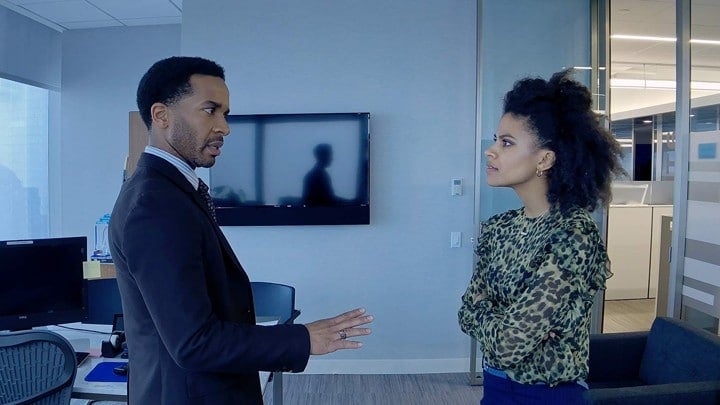 “My interest was peaked,” he admitted, noting that he craved to write about systems, “and how systems in America work. And there was something very appealing about that. And to write about it in a way that we don’t normally do. These industries are designed to keep people in place by making them think everything’s fine, you know don’t ruffle any feathers. So what movement and freneticness has to happen in order for that to be undone?” In this latest installment of The Writers Room, ESSENCE spoke with McCraney about what inspires him as a writer and how men in Black Hollywood, including some of our favorites like Michael B. Jordan and Sterling K. Brown, have literally been his saving grace in a space not so friendly to a Black queer man. ESSENCE: You’ve said this story came to you via conversations and you’ve written, obviously, some award-winning work. Does it usually work like that when you’re writing? Do things just come to you or are you inspired by books and conversations? Tarell Alvin McCraney: Every project is different. Every project has different ways and means of coming together. The play Choir Boy that I have happening right now, people keep on saying it’s based on my life, but I never went to a boarding school for boys. It too was based on conversations I had with folks about growing up and going to school and being bused to school. Out of that conversation came research, and of course I tied into it as much of my own personal life as I could. Meaning, the things, the questions that are most intimate to me. [My High Flying Bird character] Eric’s struggle with figuring out what to do during a time where he thinks he’s not gonna make money and how he just wants to be the best — these things I’ve experienced in a different industry, but I’ve certainly experienced them; and being afraid to rock the boat, fearing that the system might fall down and not reward me in the way that I was ‘promised.’ That’s a very real thing for players. That’s a part of this American Dream that I’m trying to engage. I like how all of your work, and I don’t know if this is on purpose, but the majority of your stories tell Black men’s stories and Black boys’ stories, and I wonder if that is a conscious effort or is that just what’s on your heart? It’s on my heart and I consciously do it too, yeah. What I’m highly aware of is that sometimes as a Black queer man we think we can speak for Black women. I can speak for femininity, sure, and I can speak for masculinity. I’m queer so I was born in that space, but I don’t want to take up the space of Black women telling their stories. I want to elevate them. I want to create as many platforms as I can for them, but it is not my job to sort of take up room from them. I can make room and move over and make sure that there’s space enough for all of us. So I try to stay in my ‘lane’  while also amplifying. Because there will be nuances that I miss. There’ll be nuances I’ll miss with the Black ‘male’ voice, but I can’t risk getting it wrong with Black women’s voices. There’s so few out there.

As a screenwriter, what’s your mission statement?  I don’t know if I have a mission statement for the art in particular because with the art itself I just always want to be as truthful and respectful to what’s happening. As an artist, I thrive on working with community. I thrive on working in collaboration with folk. So for me if there is a mission it’s to do it together. Andre and I happen to be friends and we’re in community with some really awesome artists like Brian Tyree Henry, Sterling Brown, Trevante Rhodes. We’re working with MBJ [or Michael B. Jordan] and Oprah [Winfrey]. I want to continue working with folks who recognize me: MBJ just signed a first look deal with Amazon and it had inclusion riders in his deal and nothing feels better than to see us all there. Since you mentioned all of these wonderful, amazing Black men that we love  — because I’ve talked to many Black actresses and they’ve said, ‘Yes, we have this sort of secret circle where we support each other. We tell each other about auditions, we group text, we make sure they’re on the red carpet’. Do you, as you’re mentioning these men, do you guys have a similar support system? It’s weird to talk about out loud, but I have it. I have a support group, well a group of friends and colleagues, who are absolutely 100% like family to me. I’m godfather to their children. We call on each other for not just the industry stuff, but…brunch. I’ve cried on their couch. You know what I mean? And these brothers — and those brothers that I mentioned and some more — we really just say, ‘Hey! There’s this thing coming up or someone’s looking for something over here, you should get into it or let me introduce you to person X.’ But even more than that, there is something about them going through the things that we all go through in terms of being in this industry that is dominated mostly by white culture and finding the time to be like, ‘Hey! I’m having a card party. We’re gonna get some ribs and it’s gonna be good.’ I shouldn’t say ribs. That’s too Black maybe, (laughs) but you know what I mean, — but it’s true we do go get ribs. 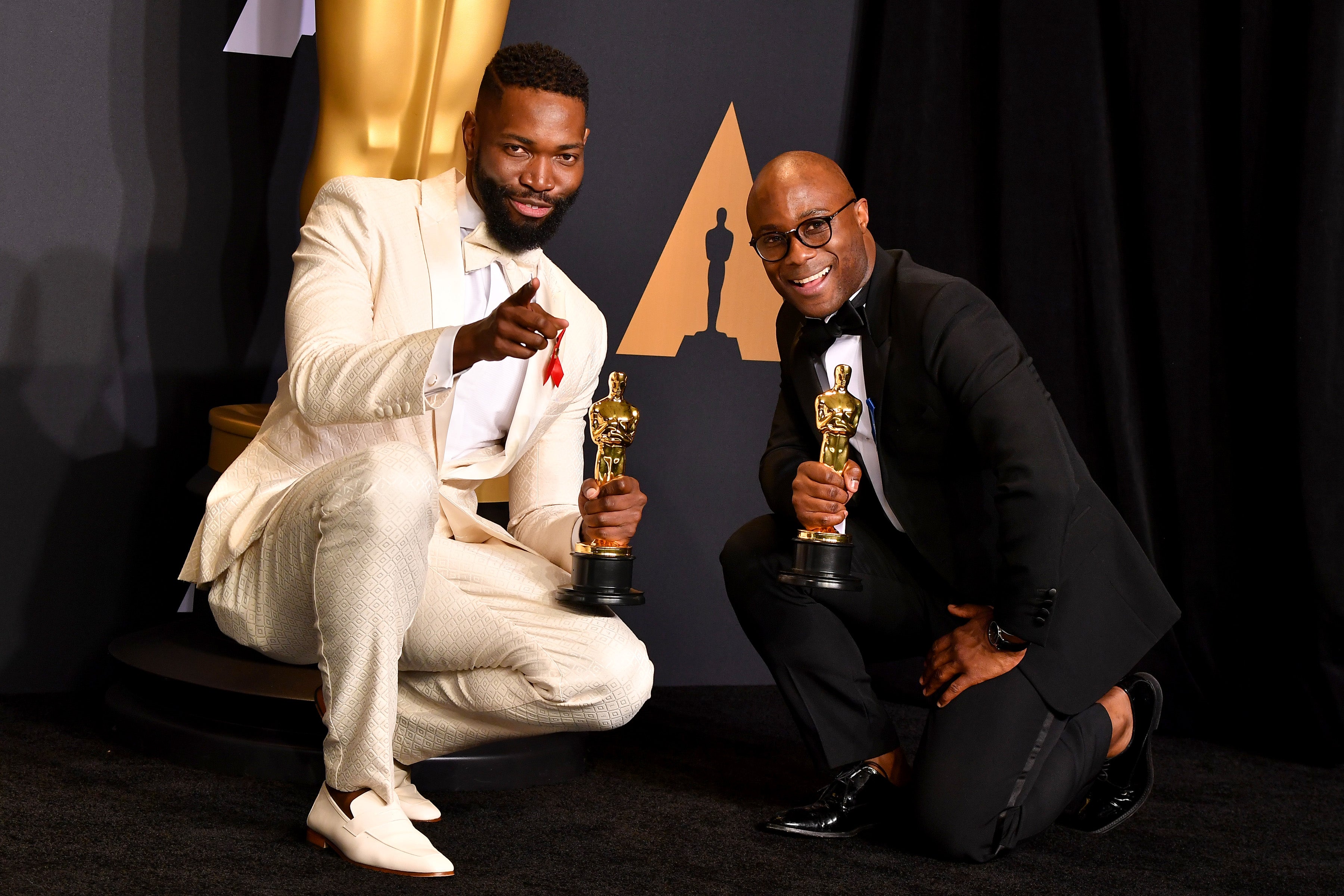 And I will admit this to you since you’re being so candid with me. I need that. Those are the things that keep me sane because I can get so far down the line of work, and I work on so many projects, and I can get really alone and really depressed and really hurt — especially trying to heal from all the past traumas. And it’s that family —  it’s Sterling calling me up and inviting me to brunch or Trevante being like, ‘Hey, I’m on my porch drinking tea.’ Or MBJ just being like, ‘Hey, I’m just saying what’s up’ or ‘Did you eat today?’ [Andre] calling me and being like, ‘Hey, let’s make these films together.’ Or Jon Hill being like, ‘Yo! I’m in Miami. Let’s get some Cuban food.’ That camaraderie…I need that. If I didn’t have that I would be lost, so I’m so thankful to them. And that teamwork is the same teamwork we see those cats have on the teams playing. They need each other just like we need each other.
This interview has been edited for length and clarity.
TOPICS:  Tarell Alvin McCraney The Writers Room