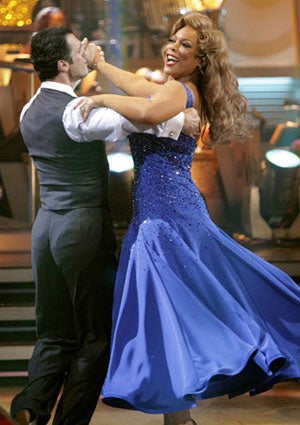 Wendy Williams has come a long way from sleeping in her car. On last night’s episode of “Dancing with the Stars,” celebs were challenged to dance with emotion, and the former radio host and May ESSENCE cover girl told of how she used to sleep at rest stops in order to shuttle between radio jobs in New York and Washington D.C.

The girl’s got ambition, and she tried to bring that strength to the dance floor. Unfortunately, the judges weren’t so impressed. Len Goodman said watching her fox trot was the real “struggle.” Ouch! Take a look at four other moments we would struggle through any time…

Romeo, oh, Romeo, must you really dance with your shirt on? Those shirtless rehearsals are all we need to see each week. On a serious note, Romeo chose to honor his cousins who died at a young age by dancing to the rhumba. He brought all that emotion to the dance floor. But not before this “fine, young man,” (as Bruno called him) had a mini-tantrum because he didn’t appreciate wearing heels during rehearsal. He joked that his cousins might be looking down and laughing at him for wearing “leprechaun shoes.” We doubt it especially since Romeo did such a great job of honoring them.

Hines Ward dedicated his dance to his Korean mother, whom he says is “the only family I really have.” Hines is always so full of life, and his samba to “Fantasy” by Earth, Wind and Fire brought a little brought a little Carnival to the dance floor. “Boo-yah! Baby’s got bounce!” yelled judge Carrie Ann Inaba yelped. Oh yes, it was sambarific!

Sugar Ray Leonard chose Bobby Brown’s “My Perogative” as his theme song because it symbolized his comeback fight. Leonard, really an underdog in this competition, finally brought some of his fighter swag to the dance floor when he chose to give his “paso doble” a boxing theme. Between twirls and hip thrusting, as Bruno noted, “Sugar Ray, the raging bullfighting spirit got you back in business!”

While we love us some Wendy Williams, we dare say that her moves on the dance floor didn’t show enough of the confident and strong woman she really is. Her fox trot was mainly led by partner Tony Dovolani. Though we did love her periodic thrusts of Tony’s bootie — now that’s the silly Wendy we love. We’re still rooting for your perseverance, Miss Wendy!

Whose performance did you love most on this week’s episode of “Dancing with the Stars”?