Skip to content
Photography Courtesy of Stephen Ironside
By As Told To Charreah K. Jackson · December 6, 2018December 6, 2018
Growing up in McGehee, Arkansas, Latriece Watkins was never one to settle with what was given. She now serves as senior vice-president and general merchandising manager of consumables at Walmart, the biggest retailer in the world. Always a go-getter, Watkins didn’t break stride even when she welcomed her first child while in law school. Below she retraces her steps to success.

LEAN INTO YOUR FAMILY LEGACY: My grandmother Ruby worked at a truck stop as a cook, and that’s where I got my first job. For two weeks I did dishes, then I campaigned and got promoted to waitress. I’ve always been inspired by the women in my family, including my great-great-grandmother, my grandmothers, my stepdad’s mom and my mother-in-law. There is a strength in the struggle and in our successes. I now share that with my 9-year-old daughter, Londyn.

BELIEVE IN YOURSELF: My son, Alex, is 20 and a student at Morehouse College. He was born two weeks before my third year of law school. I missed the first week of class, then I went back. I was determined. When your mind-set is strong, you can do anything. Sometimes, when you get older, doubt can creep in. If it does, just think back to your younger self, when you were more courageous and believed in yourself. You also need good girlfriends who will remind you of who you are.

SAY YES TO OPPORTUNITY: In high school I was cheerleading captain and president of the student council. After attending Spelman I headed straight to law school. I came to Walmart in my second year. I had applied for two part-time jobs, one at Walmart and the other at a firm in Fayetteville [Arkansas], where my law school was. I interviewed for both. The next morning I got a call from the law firm saying, “You got the job,” and in the afternoon I got a call from Walmart saying, “You got the job.” So I took both jobs. I worked at them for about six months but chose to stay at Walmart. I started in the real estate department, learning about property rights. (Walmart is the largest holder of real estate in the U.S.) The day after the bar exam, my hiring manager called to invite me back for a full-time position. I drove my U-Haul from Atlanta to Bentonville, Arkansas. I was really brave in those days. You’re in the middle of nowhere in a U-Haul and you’re like, “Okay, I’m doing this.”

LEAD WITH RESPECT: A couple of years in, I was managing colleagues I had interned for. It didn’t matter, because I was never going to be like, “Now I’m the boss.” Things come full circle, and it’s important to treat everyone with respect. Always treat people in a way that allows you to go back to them if you need help. You have to navigate relationships.

SEEK SUPPORT AND FEEDBACK: I stayed in real estate for ten years, becoming a senior director. During that time I held a leadership position at the African American Associate Resource Group for employees and met a lot of people in the company, including a mentor. I found out about a job in sustainability and met with my mentor to discuss it. He said, “Well, you could do that. But I think it’ll take you longer to get where you can go. This is a retail company, so you might want to think about merchandising.” Everybody else had said, “Yes, I think you’d be great at that.” His point was, do something that’s going to challenge you and help you learn things that you aren’t already good at. So I took a merchandising role at Sam’s Club (an affiliate of Walmart). The people in merchandising buy products for stores and clubs and negotiate everything. 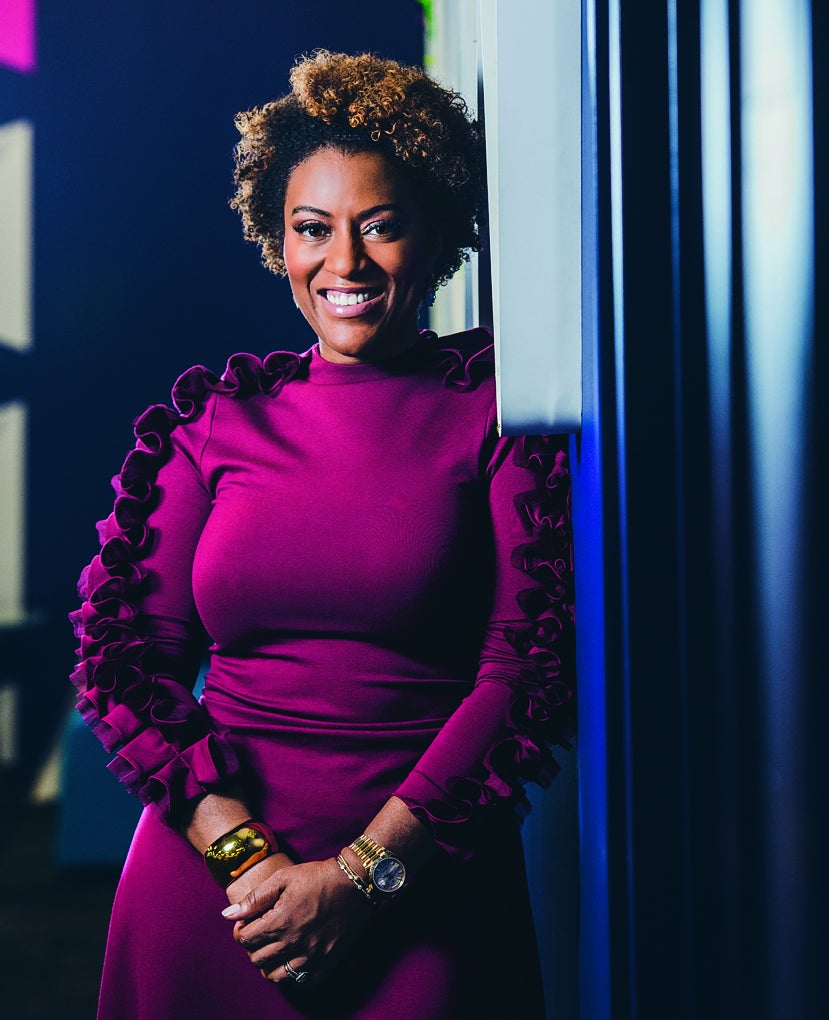 PLAY FULL-OUT: Two years into my role at Sam’s Club, my manager called to say that Walmart wanted me for a job. She gave me the best advice that I’ve ever been given and that I try to share often. She said, “Go and talk to them like you want the job. Get the offer because you were interested enough and because you convinced them that you were the person for the job. Then if you don’t want it, don’t take it. But don’t not get offered the job.” I followed her advice and got the job, which was running the company’s alcohol division for the U.S. I was still senior director. I didn’t move levels immediately, but I got more opportunity, and it ultimately paid off. Most of us don’t get promoted as fast as we think we should, but there can be a ton of value in moving across departments. I was able to accelerate a little bit faster because of my varied experiences. Within two years I was promoted to senior vice-president.

ALWAYS LOOK AHEAD: I don’t ever rest on what I’ve already done. I constantly challenge myself. For me, the year ends January 31, so on that day I take a sheet of paper and write the lessons learned that year. Always treat people in a way that allows you to go back if you need help. You have to navigate relationships.

STAY OPEN TO CHANGE: Other than being a daughter, a mother and a friend, I’ve found that working with Walmart is the longest relationship I’ve had in my life. I’ve learned to understand and operate within this culture. When Doug McMillon became CEO, he created eight work streams that each had a lead. I thought I would never want to do that lead job. But then I got offered the position. I remember Doug said, “You can always go back to merchandising, so you won’t lose anything. You’ll just get more new experience.” I decided to go for it and found that it gave me an opportunity to be exposed to a different level of leadership and interaction with the C-Suite. This gave me critical visibility in that part of the organization. Habit will push you into the next 12 months. I focus on how I will develop, help other people and continue to grow.

LIFT AS YOU CLIMB: Most of my days are jam-packed, but every month I set aside time just for mentoring. I get to talk to people and help guide them. In the process of doing that, I discover so much and get joy out of people’s experiences. I try to be really honest. I talked to a guy last night who just got promoted. He said, “I told my wife, ‘You’ll probably never see me.’ ” I said, “Well, call her back and tell her that you were just kidding, because that’s not okay.” Jobs don’t love you back. People do. And the more we keep that in mind, the better everyone will be.

As seen in the December issue of ESSENCE magazine, on newsstands everywhere!

Remy Ma, Jhené Aiko, Sloane Stephens And Other Celebrity B...

Bring Your Favorite Destination Home With These Spa Recipes ...