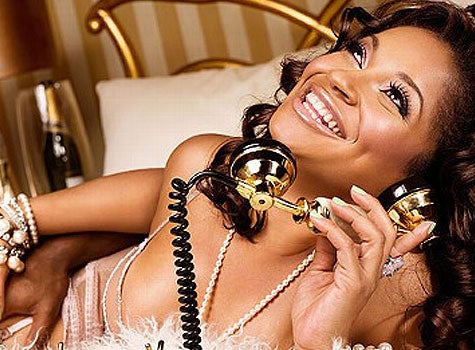 After speaking with cast member Kittie Troy from VH1’s newest reality series, “Let’s Talk About Pep,” you can see why she was chosen: Homegirl can really talk. Admitting the obvious, Kittie reveals,  “As you can see, I talk a  a lot,” but the great thing is she’s entertaining to listen to. Bold but not boisterous, sassy but not snooty, and crazy but not coo coo; Kittie is straight up, no chaser. Not minding being the wild child on the show, or in person, Kittie not only talks about Pep, but cha chas, fiances, and being a man-eater.

ESSENCE.com: This isn’t your first time on the tizube, I hear you have a pretty famous voice, you were Cita on BET’s “Cita’s World”?
KITTIE TROY: (Laughs) Famous? I guess that depends on who you talk to. Cita was a blessing and fun as hell. We had a pretty good run, we almost went for four years. Tracy Kienser, now one of my best friends, was the producer for the show, she chose the show knowing there was nothing on TV like it. She had me in mind to do Cita, and coincidentally that day I walked into her office. By mid-afternoon I was signing a contract. Okkkk?!? That’s what’s called God’s work. “This is Cita, baby.”

ESSENCE.com: Cita hasn’t been your only voiceover..
TROY: I’ve never had formal training with the voiceover stuff, but it came easily. Since then I’ve booked Disney, a show called Witch, the movie Barnyard, Nickelodeon’s Danny Phantom, and American Dragon. I became my son’s hero! I would go to the school, and his friends would be like, “Oh my God, you’re Trixie?” Later I hooked up with Carl Jones, a producer of Boondocks over at Sony, and I did voices for that.

ESSENCE.com: How and when did you and Pep become friends?
TROY: I met Pep eight years ago at my birthday party in N.Y., she was just retarded fun, hell of funny, and we clicked. We didn’t talk to much after that, but a year later I went to Jamaica to co-host a show. I’m by the pool and I noticed a group a girls all loud and crazy, and I’m like who the hell?  I know that’s not Pep and ’em…un uhhh. We talked and reconnected.

ESSENCE.com: So how did that lead to you being apart of Let’s Talk About Pep?
TROY: Cassie, Pep’s hairdresser, but more of a best friend since she’s been with Pep more than 20 years was beating Pep in the head, telling her I would be perfect for the show. I believe Pep’s only hesitation was that I was in L.A. and the show was in N.Y., and she wanted to do her NY thing. But it worked out, and when it finally came together, it was a beautiful thing.

ESSENCE.com: Everyone on the show is cool with Pep, but how well did you know the other ladies when you started filming?
TROY: Pep introduced Joumana and I, and we met her at the very first brunch. I nicknamed her Disney, because she’s just a ball of joy.  She’s just so happy all the time, to the point to where you’re like, “Really? You’re happy again?” How can you be mad at that? Jacque, I knew from BET since she used to do the news, we weren’t like friends friends but we had a pretty good rapport, and [the show] just kind of strengthened it.

ESSENCE.com: After viewing the trailer and hearing you ask, “Is everyone else’s cha cha contracting,” is it safe to call you the Samantha of Sex and the City?
TROY: I don’t have a problem with that comparsion. The only issue I may have is that Samantha was a character, this is who I am, this is really my life. I’m very comfortable in my sexuality. I have always liked being attractive to men, flirting, and getting attention. But, I don’t hump everything with a pulse. Just because they are sniffing around, they are NOT taking a bite. I love the attention and all, but you really have to be something to me for me to take the plunge. I just like to play.

ESSENCE.com: Then would you consider yourself a man-eater?
TROY: I like that damn title!! Hell, yea, I eats ’em up.

ESSENCE.com:  An ideal date for you would be with what type of man and where?
TROY: Don’t know how cornball this may sound, but I’m looking for a renaissance man.  I love to sit in a bookstore for hours, I would go to the ballet in a heartbeat; I love museums, culture, arts, all the things that require you to shut the hell up and pay attention. I need a mate that would be open to that and preferably have knowledge. I don’t have patience for men who don’t know anything, because I get bored easily. After the sweater is dry, and we’re finished humping because you fine as hell, what are we talking about?

ESSENCE.com: Ha! Have you ever been married?
TROY: No, never married, but I have had three different fiances.

ESSENCE.com: Well, damn, what’s the best part of being single?
TROY: Probably feeling like you’re not attached to anyone.  Sometimes it could be good feeling, but other times it’s like a leech. I need a man that will allow me to do me, but still man enough to be like, “You need to come sit your little ass down.” I’m a grown-ass woman, and I need a partner who understands that I need to be complete before I meet a man. That saying, “You complete me” is a misnomer, because what happens if you fall apart. What are you left with? 50? Who needs 50?

ESSENCE.com: What type of female will be able to relate to you on the show?
TROY: Women who are ballsy, have a go-getter attitude but aren’t reckless. Women who are confident, who make the most of their lives, because I’m an in-your-face type of gal.

ESSENCE.com: With the overload of reality TV, why should we watch?
TROY: Grown-ass women need an alternative. If reality is the new face of TV, then give us something to look at! Oftentimes the focus of reality TV is on winning the prize of a human being. Like um, no? Ain’t nobody winning no damn prize, we don’t live in a house together, and we’re not competing for anything. This show is about the journey, girlfriends who support each other and want the best for each other.