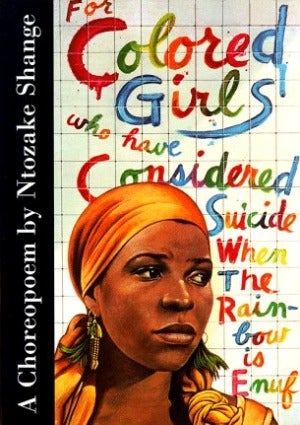 Many of us have waited anxiously for the nationwide release of Tyler Perry’s newest film “For Colored Girls,” which hits theaters today. Before you round up the girls to make it a ladies’ night out, know there would be no Tyler Perry adaptation without the ingenious and fearless poetry of playwright, Ntozake Shange.   Not only did Shange’s original book of poems, “For Colored Girls Who Have Considered Suicide When The Rainbow Is Enuf,” have one of the most memorable titles of all time, it also served as a stage production that left audiences all over the country transformed in the ’70s. From the book’s publishing in 1974, to its On- and Off-Broadway adaptations in 1975, “For Colored Girls” continues to reach higher levels of acclaim. Born Paulette Williams in 1948, Shange graduated from both Barnard College and the University of Southern California and started her career as a professor of Afro-American and Women’s studies at various community colleges, all while making public appearances as a dancer and poet. Shange’s passion for poetry led her to create of “For Colored Girls,” much of it inspired by events in her own life; her inspiration pulled from a very dark place — a failed marriage that caused her to attempt suicide on four occasions. In 1971, Paulette changed her name to Ntozake (Xhosa for “She with her own things”) after literally seeing her own rainbow. “I was driving the No. 1 Highway in Northern California and I was overcome by the appearance of two parallel rainbows. I had a feeling of near death or near catastrophe. Then I drove through the rainbow and I went away. Then I put that together to form the title,” Shange recalled to CNN a few years back. The play, produced in 1975, broke tremendous ground because of the the way it presented the struggles of Black women. Abortion, promiscuity and rape are just a few of the issues Shange tackles in the now epic play. Its vivid imagery and powerful language resonated with both Black and White audiences alike back then and throughout its many incarnations on stage and screen. This Friday, as you head to theatres nationwide, know that you’re in for a thought-provoking ride, and while Perry brought the masterpiece to film, it’s Ntozake Shange we have to thank for the work’s existence.