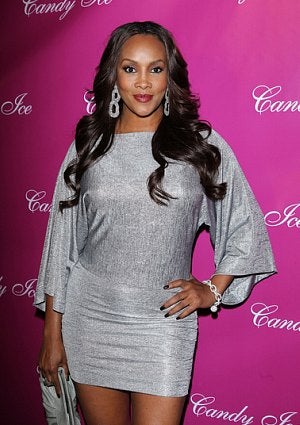 Actress Vivica A. Fox, 46, is back in the news again not for a film, but for the drama involved in her latest relationship with the much younger man known only by his first name, Slimm, 26, one of Atlanta’s most popular party promoters. The couple, whose relationship began in January of this year, had no problem making their relationship public after being photographed together on numerous occasions. All the posing for the camera came to an abrupt end last week when Slimm, co-founder of Plush Blue Entertainment, emailed out a press release announcing he had dumped and ended his relationship with the ‘Two Can Play That Game,’ starlet. “Hey this is Slimm, unfortunately me and Vivica are no longer dating,” read the promoter’s pronouncement. “After eight months, it’s time to go our separate ways. In life you can love and have chemistry with a person, but flaws can sometimes outweigh the relationship. I wish her the best and I know she feels the same. Thanks.” We were ready to feel sorry for Fox, until the very next day, Slimm reportedly sent out a follow-up statement retracting everything he stated prior. With a change of heart, Slimm stated “I want to clear the air about the rushed statement released yesterday about Vivica and I breaking up. Sometimes a person may act out of anger,” he back-tracked, and then admitted he had flawed in “overreacting instead of letting time take its course.” He concluded his sappy apology by stating the obvious “no one is perfect,” and that “Vivica is an important part of my life and I would never try to hurt her. Thanks for supporting us as we figure things out.” Vivica responded to drama, emailing the NYDailyNews, “Luv is crazy sometimes! Slimm and I r fine! All relationships have their ups and their downs.I’m soo proud that Slimm was man enough to clear up the air. He is a very good man with a great heart!” Ok umm, while I understand the break-up to make-up dynamic in some relationships, is Vivca not being hypocritical? We all remember the very messy breakup she went through with rapper Curtis ’50 cent’ Jackson back in 2003/04. After both celebs used the media to bicker back and forth, Fox made a very public statement at the 2004 BET Awards stating, “I don’t have nothing against [50 cent] but what I didn’t like about the whole situation is that he made it public, and pitted a sista’ and a brotha’ against one another, and that was wrong.” Deja vu? Because it looks as if her newest man did the very same thing that displeased her in a past relationship. Slimm made their whole situation extremely public, leaving us wondering if it was wrong when 50 did it, how do you excuse Slimm (with two m’s) when he does the same? Vivica, love who you want, forgive when you want, but if you seek privacy, you may want to keep some things private.