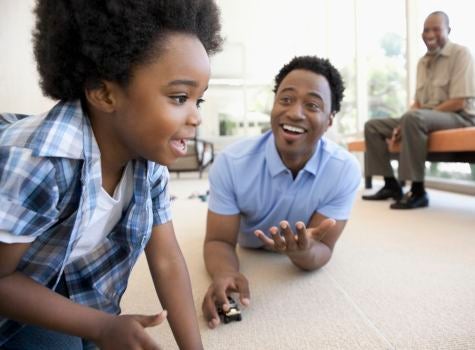 Part two in my “Three Part Series on Unprotected Sex” is about “The Bond Between Man and Infant.” Women, let me explain something to you, the bond between a man and an infant is why you should not have unprotected sex. More importantly, it is why you should not get pregnant by a man that you are not married to. When the baby is born, the average man does not feel the same way about the birth as the average woman does. We did not carry our babies around in our wombs for nine months. We did not get to feel the babies move and kick in the same fashion as you did. Our bodies don’t change. Our hormones don’t change. In most cases, we do not change either. So when the doctor placed my beautiful son Ethan into my hands I just said “thanks.” I was not overjoyed or filled with emotion. I watched my wife cry tears of happiness and I was glad that she was healthy and my new baby boy was healthy, but it is not like I wanted to give the doctor an extra tip or invite him out to dinner or something. He did his job. I had to learn to love Ethan. My wife had a nine-month head start on their emotional bond. Ethan and I had some catching up to do. At the time of Ethan’s birth, I am not sure if I would have traded my life for his. But right now today, the bond between my son and me is so strong that I would trade all of your lives for his! I would take all of you out!  I love my lil’ guy. I say all this to explain to women that when you get pregnant by a man that you are not married to, you are potentially setting your child up for a bad relationship with his or her father. It is important that you know this in advance of your unprotected sex-capades. I am not excusing the behavior of men. We are responsible for our own actions. I am merely explaining why so many men are not involved in the lives of their children. The reason why I love my son the way I do today is because I have been with him since day one. I have taken full advantage of my opportunity to nurture the bond between my son and I. My son has been on this earth for about 1,300 days. I have seen him, played with him, loved him and taught him something on 1,275 of those days. But if his mother and I were not married, I might have only been able see my son every other weekend, every other holiday and maybe get some extra time with him during the summer. My 1,275 days could easily be dwindled down to 300 days. That 300 days are less than 25 percent of the time I have with him now. And maybe because I get 75 percent less time, I love him 75 percent less. And maybe when his mother is acting crazy and I don’t feel like being bothered with her I decide not to pick up my son this weekend. And maybe because I didn’t pick him up last time and it was okay, maybe it will be okay if I don’t pick him up next time. And maybe the baby mama drama is too much to deal with so now I don’t bother at all. And maybe not seeing my son, not spending time with my son doesn’t bother me because I don’t miss him because I don’t have a bond with him. Out of sight, out of mind. If the man has had difficulty emotionally connecting to the woman, it is quite possible that he will have the same difficulty emotionally connecting to the child. In order for the relationship to develop between man and infant, the man has to be able to spend time with the child. Most of the time, I would venture to say that it is the man’s fault that he is not spending time with his child. Sometimes it’s the woman’s fault and sometimes life gets in the way. Wouldn’t it be better if a condom got in the way? So I tell every pregnant woman that I see, “you let that man hold that baby first.” I tell every man that I know that is expecting, “hey man, we need you!” A woman should never stop a man from seeing his child, (unless the man is crazy or violent or something). I don’t care if he doesn’t pay the child support payment. Maybe if you let him see the child, he will develop a bond with the child and be compelled to do the right thing and support his kid. Single mommies, I know it’s hard to be away from your infant, but you can do it in increments. Feed the baby, change the baby and drop the baby off while you run and get your nails done. If you had a baby by a man that can’t watch a baby for two hours your punishment is to re-read my commentary “9 Reasons to Have Safe Sex” every time you go out on a date from now on! Steven James Dixon is the author of the sure fire conversation starter “Men Don’t Heal, We Ho: A Book About the Emotional Instability of Men”. He lives with his wife and son in Dallas, Texas. His book is available at relationshipbeast.com. Steven James Dixon will share his relationship advice on New York’s 98.7 Kiss FM on Thursday June 10 at 9:30 p.m. ET. He returns to the radio on New York’s Hot 97 on Friday June 11 at 7:45 a.m. ET. New Yorkers can also meet Dixon at his book signing for “Men Don’t Heal, We Ho.”