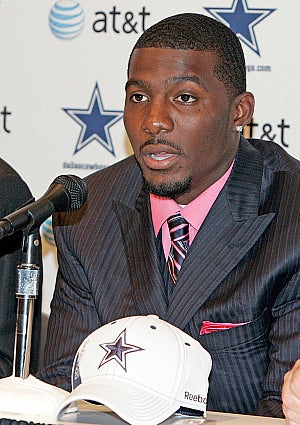 Is your mother a prostitute — a floozy, a streetwalker? This is the question that Jeff Ireland, General Manager of the Miami Dolphins, had the audacity to ask Dez Bryant, one of the most highly rated wide receivers in the 2010 NFL Draft, in an interview last week… “They asked me if my mom’s a prostitute,” Bryant says, an account that was confirmed by attendees of the meeting. “No, my mom is not a prostitute. I got mad — really mad, but I didn’t show it. I got a lot of questions like that: Does she still do drugs? I sat and answered all of them.” Evidently, this outlandish form of questioning may shock us, but unfortunately, it isn’t anything out the norm for Black athletes in the world of football. Third overall pick, Gerald McCoy, says a team insulted him when they asked him whether he wears a G-string or jockstrap. Rhodes scholar Myron Rolle was asked by the Tampa Bay Buccaneers if he deserted his team by attending Oxford. But, to ask someone if their mother is/was a hooker, well, that’s just crossing the line. A line that I’m offended to know NFL executives are so comfortable crossing, especially with our Black athletes. Proving one thing: the National Football League holds their executives to a much lower standard than their players. If not, where’s the season-long suspension, or the fine coupled with a written warning for these execs? At most, there’s someone telling them to “say sorry,” as Ireland later issued an apology to Bryant, saying he used “poor judgment.” The players are left like Bryant, to forgive and keep it moving. Sometimes, they are compelled to passively respond, like Rolle did when asked if he was upset that the Bucs questioned his decision in accepting his Rhodes scholarship. He said, “They (both) want to see you on your feet, see how you respond to certain questions and I think that was an example,” Rolle said. “So there’s no anger, no ill-will toward them at all.” Please. These players only remain agreeably calm, because like rapper Foxy Brown said, it’s a Catch-22: “They wanna be honest but I’m not a dummy / won’t say some slick shit and mess up my money.” Many of these questions are not only obnoxious, but it also says a lot about how more times than not, the character issues of our Black athletes are massively overblown. Yup, I said it. Tiger Woods, Allen Iverson, Kobe Bryant, Shaquille O’Neal — overblown. Not that they weren’t wrong, but their situations were sensationalized to the umpteenth power. Causing many Black athletes to fall victim to the court of public opinion at a much stronger degree than the White counterparts. What if, in fact, Dez’s mother was a prostitute. How exactly would that have any effect on Byrant’s skill or talent? However, if he did answer ‘yes,’ the admittance of the truth would have blown up, and in a matter of minutes, trickled into the super judgmental world of entertainment. Not to imply White athletes never get roasted when they find themselves in troubling predicaments, but it’s harder to remember a White athlete whose scandal caused him to be scorned so publicly that he became Public Enemy #1. Because of what they did, Woods, Vick, and OJ have become household names for those who love sports and those who’ve never even watched a game. On the flipside, does Ben Roethlisberger’s name sound familiar? The NFLer they were “going to” charge with rape (but still haven’t) wasn’t dragged in the mud nearly as much as Kobe was, and this isn’t the first, but second time, he was accused of rape. Unlike Vick, Roethlisberger gets to stay on the team. Unlike Woods, Roethlisberger doesn’t have his whole life exposed. Ultimately, unlike many Black athletes who have made their mistakes, Roesthlisberger only gets a six-game suspension, and still the quarterback has yet to be charged with anything. As proud as we should be that our race dominates most of the professional sport industry, it’s sad that White athletes aren’t being accused, questioned, arrested and charged for the same shortcomings and treated with the same severity. Interviewers, attempting to prepare potential stars, ask many of our Black athletes questions that would evoke certain emotions on purpose, to determine how well they handle the pressure, but I wish someone would ask me if my my mama was a prostitute.