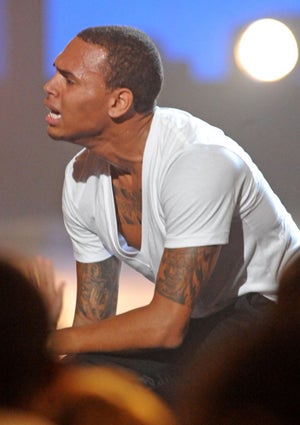 Chris Brown, cry me a river, build a bridge and get over it. Young Chris made headlines on Sunday night for his spectacular tribute to Michael Jackson at the 10th annual BET Awards. No question, Brown’s performance put all tributes to the King of Pop to shame. But, just when I was finally ready to say something nice about the fallen star, I had to roll his eyes when I saw his shoulder-shaking, teary-eyed emotional breakdown… Granted, I cannot take anything away from his awesome performance, he truly did an outstanding job. Yet, what he accomplished in entertainment was overshadowed by his tears, as he is still clearly begging for forgiveness for the 2009 incident in which he violently beat then-girlfriend Rihanna. Was it really tactful to use a performance that should have been all about remembering Michael for his own therapy session? It was amusing to see Twitter and Facebook instantly go wild, trying to gauge whether or not Brown’s tears were authentic. It spoke volumes on how Brown’s image is still so terribly viewed 18 months later. Although one can understand the symmetry between the song’s lyrics and the mistakes Brown has made in his life, the tears felt more like self-pity than poeticism. Once the snot dried on Brown’s nose, and he got up from his knees, he looked even more like a little boy to me. How immature of him to think tears could excuse him for his piss poor decisions, and think that finally showing some kind of emotion would get him out the doghouse. For some, maybe his waterworks worked, but I wasn’t convinced, and thought it was extremely selfish to make this moment about him when he was supposed to be paying respects to the dead. I would have appreciated C. Brown finishing like a professional. At this point, those who will forgive him have already forgiven him, and those who won’t will never do so. I am clearly of the latter. Brown made it even harder to believe the whole ordeal was sincere when later in the night he received BET’s Fandemonium Award and said to his fans, “I let you all down before, but I won’t do it again, I promise you.” Brown’s grovelling for public sympathy convinced me that his earlier emo moment had been staged for the cameras. While actions do in fact speak louder than words, I’m no sucker, those witless tears didn’t say much at all. Read another take on Chris Brown’s emotional Michael Jackson performance here.