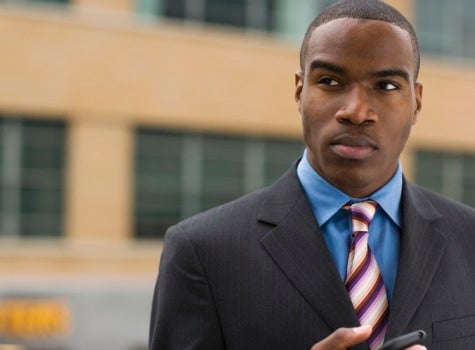 First let me say this: I am single. However, just like you don’t have to smoke crack to tell “rockheads” don’t do it… well, you get the rest.

Second, I’m an avid, calendar-clearing, repeat-watching fan of the “Real Housewives of Atlanta.” You know the type. I text my girls during the commercials. I feel like I know the “ins and outs” of the cast intimately. And, occasionally I pass judgment on their decisions.

With those two details out the way, it’s time for my third assertion: When it comes to marriage, particularly to an entrepreneur, it can’t always be tit for tat. Over the last few weeks I’ve watched Cynthia Bailey’s now husband, Peter Thomas, try to pull out the dagger ripping his heart apart as his business — their family’s bread and butter— revenue dropped lower than NeNe Leakes’ cleavage line. Thomas shared his woes about picking up the pieces. Bailey worried about financing their wedding. Thomas grew angrier about not getting investors. Bailey balled about being owed her investment in his business. Thomas was forced to close his restaurant and rebuild. Bailey cried about not going on a honeymoon. All I kept thinking is, “where dey do dat at?”

Admittedly, we were privy to the couple at a low point, plus the show is edited. And yes, Thomas played his jerk card several times. Still one thing he said resonated with me louder than his Caribbean accent-laced tirades at Leakes or his autocratic commands to Bailey. There’s only one path to independence and economic parity for Black men: entrepreneurship. From then on he had me — well, honestly, the moment I saw his handsome, rich milk chocolate, salty-bearded face I paid attention, but …y’all know what I mean.

Instantly, I thought back to the struggles of my grandfather and uncle. Both played by corporate America’s rules. Neither won. My grandfather was boxed out of a huge deal by a big conglomerate that did not want to play ball with a man of his status and hue. My uncle, a natural rainmaker, trained countless White subordinates only to have them promoted over him. They are not alone. Our men share their woes with us every day and in every way, from the barstool to the bedroom. Additionally, we all know there are plenty of reasons Black men are not getting married, have a high incarceration rate, and are not thriving in college — and it isn’t because most of them are innately irresponsible. Many are depressed. Some feel hopelessly incapable of providing for a traditional family. A number of them turn to entrepreneurship.

Now I’m a woman who loves money and hustles to have her own. Furthermore, I would never advise any female to give a man her last. Still, in matrimony, especially to an entrepreneur, we have to do a “situationally prudent” job of keeping score of what’s yours, mine or ours. In this case, if Thomas’ money “gets right,” Bailey knows he’s a devoted provider. Similarly, she understood that she made a dual investment — in her man and portfolio — when she loaned the funds.

Personally, I think it’s our job as Black women to support our men spiritually, emotionally and financially. If we don’t, who will? Due to socioeconomic disparities, many people of color are less likely to be gifted money or get risky loans. We also know that Black men face biases that Black women in corporate America don’t experience, and entrepreneurship gives communities a strong economic base. Lastly, Black women are earning more than ever before. Instead of buying Coach and LV maybe we could be saving to help that hubby, father or nephew — or sister or niece — launch a well-researched, realistic business plan. Again, only if it makes sense.

Equally important, I am not saying give your hard-earned money to Junebug, because he’s fine and can throw it, or David Jones, because he graduated from Morehouse and might marry you, or even Lil Tyrone, your play nephew, because you feel guilty about his plight. I am saying that if you have a solid, committed partner (ideally in wedlock, unless you’re against marriage), and you know that entrepreneurship is his passion you should work with him. Should you keep a budget? Yes. Should you keep an emergency fund that he can’t access? Definitely. Should you keep score? Probably not.

Lastly, if you’ll miss the money you have to loan, you don’t have it to give. This is evidenced by the amount of money the new Mrs. Bailey-Thomas is tripping over. When I found out it was $10,000, all I could think was, “she’s probably spent more on a purse that’s buried in her closet.” My advice to her is simple: Girl, let it go. That’s neither super nor model behavior.