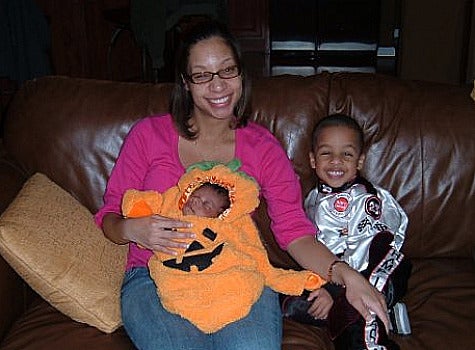 I’m embarrassed to say this, but it’s the truth: I almost lost it when I broke up with my fiance. It started five years ago. I was in my second year of law school when I became pregnant with my son, Justin, now 5. His father wasn’t exactly “daddy material”, so I knew I was destined to be a single mother. It was a harsh and daunting fact, but my reality. Eventually, I transferred to a law in my hometown, so I could be near my family. Then something amazing happened: I reconnected with my high school sweetheart. Obviously, he was salty that I was knocked up, but he wanted to build a relationship. We did.

Seemingly overnight my nightmare morphed into what seemed to be sweet dream. My new man stood by my side as I completed law school, prepared for my state’s bar exam and raised my son. After a while we moved in together and things were great. Three years later I got pregnant. I assumed the man who helped me take care of my baby with another guy would be ecstatic about raising his first biological child, but that wasn’t the case. He panicked. Things were okay until my maternity leave was up and I had to return to my job; between working, breastfeeding, taking care of the kids, and the house, I was completely exhausted. Instead of being supportive he grew distant and began cheating – to top it off he was sloppy. I confronted my fiance about his fidelity and he did the unthinkable: He chose her.

When he walked out he turned his back on us all: our 3-month-old daughter and my 4-year-old son, who called him dad. Life went from hard to hopeless. My best friend, the man who once talked trash about absentee fathers, and promised to love and cherish our family, preferred to spend his evenings flossing around town with his new girlfriend – who was in her early twenties. And while getting money for his daughter and for basic bills wasn’t hard, getting him to do more than spend a few hours with the kids was challenging. He’d pick up them up from the sitter or school then bounce; the rest was up to me.

My heart went into foreclosure and my world sluggishly followed pursuit. I cried everyday – and a lot. Some times my face looked so bad I couldn’t go into work. Even when I made it into the office I couldn’t focus. I had to tell my boss what was going on to avoid being fired. I felt betrayed, abandoned and scared. How would I tackle raising two children – with different daddies – alone? How could he leave us? Why didn’t he love me anymore? Some nights I went to sleep hoping it was all just a nightmare. Thankfully, my mom interceded.

Like many times before she sat me down so we could talk, but this time I heard her. She told me that she felt responsible for everything that happened – and that blew me. We cried, hugged and then got real. She stressed that I had two very important reasons, my kids, to stop wallowing and start living. She told me that it was my responsibility to make sure that they were able to cope with our separation, so if I couldn’t move through it for myself I had to do it for them. That’s the strength of a mother’s love. For four hours my mom shared insight about our lives and, moreover, she emphasized how fabulous I was. Of course the latter part shocked me, but she was right. I wasn’t a quitter. I wasn’t pathetic. I wasn’t deserving of the treatment I received. I was a beautiful woman. I was smart. I was a good mate and mother. Most importantly, I wasn’t powerless. I could determine the direction my life took. I did.

Instead of sitting home and waiting for my ex to call or come over I started using that time to read to my kids, take them out or exercise. I stopped begging him to keep his promise to be my man and their father. I refused to argue with him and started dating. My life sans the moping gradually ditched its nightmarish quality and I learned to celebrate. I bet you can guess who came sniffing around after a few months… yep my ex. I’d love to say we’re living happily ever after or that I kicked him to the curb, but the truth is that we’re figuring things out. While our future together isn’t set in stone, I know what is: my sanity. And I’ll never let anyone else put that in jeopardy.