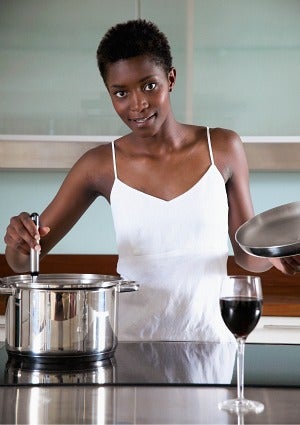 I am not a fan of cooking… and I blame it on trauma. See, I grew up in one of those old-fashioned households with a grandmother who believed that all women should know how to cook — and you “learn ’em” young. So when I was 8 years old, my life dramatically changed. My after-school ritual of snack time, one hour of television and then homework time was truncated to a quick cookie, about 15 minutes of TV… then an hour or so of cooking and serving all of the men who resided on the lower two levels of our three-family house… I didn’t mind the serving part. Playing delivery girl to the males in my family was usually an adventure and treat. But trading-in 60 to 90 minutes of cartoons for draining beans, cutting vegetables and stirring meats seemed like a sour deal to my third grade self. Furthermore, I hated the fact that I “lost” my cartoon privileges for “woman’s work,” despite being a little girl. I loathed spending time in the kitchen after school, and would sneak out as often as I could, running back and forth between my “my fiery oppressive pit of indentured servitude” (aka the kitchen), and the living room until the threats of my grandmother’s sinister pinches  — you know the ones that start with a lot of flesh but end off with a small piece of skin — relegated me to pacing our 10×10 square-foot cooking space like a caged animal. So cooking, yeah, I hated it. Now I didn’t despise all things domestic. Cleaning was a must. And when it came to laundry, I was the girl. I could sort and monitor cycles for detergent/fabric softener with the ease of a pro, and only had my things stolen from the laundromat once — hey, I really wanted some French fries, so I left for a few minutes. Twenty years later, cooking still isn’t my forte. I’ll do it, but I still don’t understand why I am expected to love it, especially in 2010. During a recent online group chat, a friend of mine who’s a pastor — and has a large male commentary base — asked whether it was necessary for a woman to maintain traditional gender roles. Many of the men felt it was a no-brainer; the answer is yes.  Here’s where it gets tricky: They didn’t just expect women do the cooking and maintenance of the household, she was also “required” to work and contribute equally to finances. I don’t get it. I pointed out the obvious flaw in their logic: that is not a traditional role. In traditional gender roles, males are the breadwinners and women operate as managers of the households, cooking, cleaning and supporting her companion’s rise to economic success. So, if modern times mandate women to acquire hybrid duties (meaning, she has to work and can’t stay home) for a couple to enjoy the spoils of middle class, shouldn’t it also require reconfiguring notions of domestic duties for males? Should I be happy cooking, cleaning and paying bills while my male counterpart does less? If I can’t stay home, shouldn’t he learn how to cook, or help in some way? Personally, I think it’s unfair to expect females, especially women of color, to continue to operate under the superwoman myth. Being perpetually tired is not part of my happily ever after. I don’t mind bringing home the bacon, or cooking it, but I don’t want to be robbed of my choice — and I’ll need help. I want to be part of a team that considers everyone’s needs and strengths. If my partner is a better cook, why can’t he do it? — I’ll clean the hell out of his drawers and make sure our sheets are always clean. I’ll even do it in lingerie and a smile… at least occasionally. Tell us your thoughts on gender roles in relationships. Does the woman have to cook?