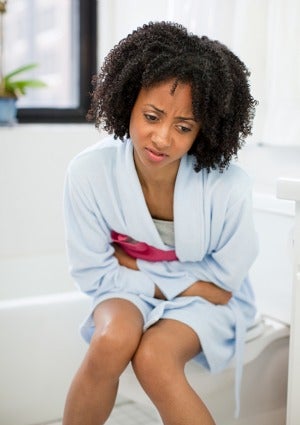 Last Tuesday marked the second time in my life that I’ve been an inpatient at a hospital — the first time was my birth. My return isn’t due to a blessed event. Instead, I’m going in — and under — to get tumors cut out of my gut. Sound vulgar? Off-putting? Well, that’s how I feel: offended. Why me?

For those who are unfamiliar with uterine fibroids, they are benign tumors that line the walls of the uterus. According to studies, Black women are three times more likely to get them than Caucasian women. Sadly, I wasn’t the cream of the crop when it comes to this staggering statistic; I’m right in there in the masses. Additionally, since my fibroids are poorly positioned (they are at the base of my cervix), the doctor gave me a startling ultimatum: get rid of them or you can’t have kids. Ouch!

I’ve tried to postpone this elective surgery for quite some time and for many reasons. First, I don’t really have any symptoms. Many women experience extreme discomfort, bloating or painful periods. Luckily for me, I was asymptomatic… and maybe I let it go to my head, then get to my belly.

Initially, I took my fibroid diagnosis like a death sentence. I bawled in the doctor’s office once I found out that I’d have to have surgery at some point… then I decided that “Living La Vida Loca,” at least diet-wise, would be my coping mechanism. While I did cut meat out of my diet, mostly, I still drank soda and downed dairy products (all have been linked to fibroid growth). For me, Starbucks was more calming than sex — hey, it’s been a while — and I was a Vanilla Latte nymph (I have the gold card to prove it).

I wasn’t being reckless. The truth is, I was scared. My mom died of ovarian cancer and while they are not directly linked, the fibroids can mask it. The mere thought of opening my belly and perhaps finding something greater was terrifying to say the least, so I decided to avoid it. I was also secretly waiting for a reason. As a woman who’s 3x single (no kids, husband or pets) I really didn’t want to come out of anesthesia to be welcomed back to the world of the living by hugging and kissing my family (sans my mom) and friends — I was hoping for a significant other. Lastly, I was obsessed with finding the right time. I’m a lady-on-the-go, so staying put for 2-4 weeks seemed more frightening than dodging traffic on the FDR Drive. Still, in the midst of all of my why-nots I found one major why: me.

Having the surgery looming began to feel like I was ducking a creditor I knew I had to pay, the government, not Macy’s. Ironically, the owner of the note is none other than myself. I owe it to me to get my health together. I need to face my fear of dealing with physical vulnerability without the woman I love the most (my mom) and some man I’m still waiting to meet (these mystical things called “husbands” — lol). Most importantly, I need to figure out why I’m afraid to be still.

Today I’m balancing my fears (of losing my life, fertility and independence — do I sound dramatic?) with my faith. Since I still believe in happily ever afters, it’s time to cut out the dead weight.