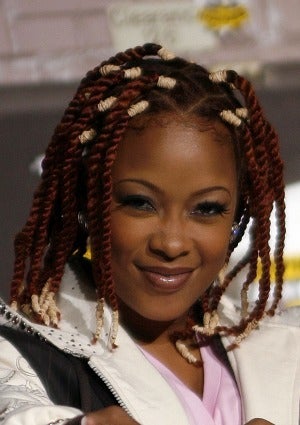 In 2008, rapper Shawntae “Da Brat” Harris was sentenced to three years behind bars, seven years of probation and 200 hours of community service for striking a woman in the face with a bottle. The incident occurred at an Atlanta-area nightclub and left the victim’s face permanently scarred.

Harris served her time, and earlier this week was released on house arrest. The very elated rapper chatted with ESSENCE.com about what she learned, her reality show, and Nicki Minaj.

ESSENCE.COM: What’s the first thing you did when you got out?
DA BRAT: I went to the Huddle House, and ate me a steak, scrambled eggs with fresh vegetables and some fried shrimp. I didn’t have any shrimp the whole time I was in prison.

ESSENCE.COM: Describe one of the tougher moments in jail?
DA BRAT: When I went to lockdown. There was a young Black officer that I heard rumors that he had said stuff like, ‘Oh I’ll lock her down, I don’t give a damn who she is.” I was so mad when he finally locked me down because it was for no reason. When he told me to, ‘Turn around and cuff up,’ to walk me to lockdown, I really had to pray, because one side of me was like ‘If you really going to lockdown then you need to make it happen and have something to go to lockdown for.’ The other side of me said, ‘Hold your peace, this is what got you here, keep walking and don’t say nothing.’ Some officers do so much to try and get at you. Not all the officers were like that, most were nice and respectful. Had I showed my ass, I would probably been in lockdown longer than I was.

ESSENCE.COM When you reflect on your time in jail, what kind of  impact does it have on your life?
DA BRAT: Not to take anything for granted, because it’s the little things that mean the most.  The letters, the food — I had no idea I wouldn’t see a shrimp for three years. You don’t look at those little things you take for granted so easy, until you get sat down, get locked up, or get into a position were you see other people who are  less fortunate than you — that don’t have anybody.

ESSENCE.COM: As a female rapper what are your thoughts on Nicki Minaj?
DA BRAT: I’m happy for her. She’s doing her thing, I don’t know much about her but I’m sure she probably been trying get to where she is for a while — so let her get it.

ESSENCE.COM: What’s next for you?
DA BRAT: Music, reality show, a book, working with my own artists. You’ll see – I’m about to get it in.