By Avon Dorsey · Updated October 23, 2020
Fresh off the heels of this month’s Creed II premiere in New York, cast mates Michael B. Jordan and Tessa Thompson reunited this week in London for the European premiere of the film. The reoccurring trend for Thompson in the UK, was the color green- as she displayed her recent affection for the bright hue in a gorgeous Maison Valentino floor-length, sleeveless gown. The dress’ simple yet exquisite shape matched Thompson’s paired down make-up (which included a pop-of-red lip), and a sleekly pulled back ponytail– her natural look wasn’t over-the-top, and it didn’t compete against the dress, allowing her to appear virtually flawless on the red carpet. 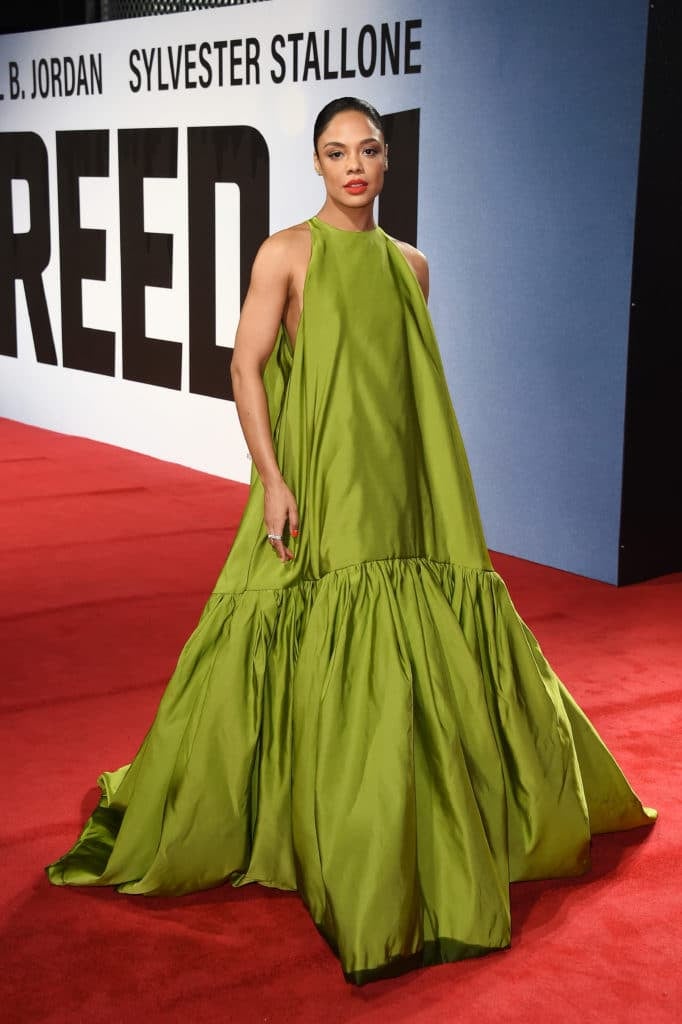 Expressing her love for the color, Thompson says, “Green is the new black,” as she compared a recent look to her choice of black for the original Creed premiere in 2015. Her fashion team consists of the styling duo Wayman & Micah (Wayman D.B. and Micah McDonald), and they’ve been on a slaying spree with Thompson- even dressing her for our November 2018 cover and cover story. Scroll through Thompson’s mean-green timeline below to catch her in the color of the season! Thompson, out-and-about during Thanksgiving weekend celebrating Creed II in theaters.

thank you to all the folks that went to see our movie this weekend. (Moment of joy captured in Irwin and Margo Winkler’s floor to ceiling green bathroom by @nicoledisson)

Green Is The New Black. Aye. The first photo is from the premiere of the first @creedmovie and then years later— the second. Out in two days. 🐸

When you are on @jimmykimmellive on his BIRTHDAY and you forget to ask the audience sing to him. 🤦🏾‍♀️But at least you brought the gift of fashion in the form of @christopherjohnrogers, k. • HBD @jimmykimmel Watch TONIGHT on #ABC