By Britni Danielle · Updated December 6, 2020
Almost as soon as Tamar Braxton sat down to chat with Wendy Williams, it was apparent fans were in for some tea. After showing off her shoes on Thursday’s episode, the talk show host asked about her recent split from her ex-husband, Vincent Herbert, after almost a decade of marriage. Braxton said while she still loves him, the singer knew it was time to move on. “I was not willing to negotiate my happiness anymore under any circumstances,” she explained. “I love Vince. He is my family member. Just like with family sometimes, you kinda got to know when to draw the line,” she continued. “I wanted to be happy and he deserved to be happy. We shouldn’t be just coexisting as a married couple.” While Herbert will still remain in her life (he’s the father of son, Logan), the 41-year-old singer has moved on. She has a new man, and the pair are “very much” in love. “He’s so fine. He’s like a whole snack — a lunchable,” Braxton said, explaining she met the Harvard Business grad at a friend’s birthday party. Though they’ve only been together for three months, Braxton said she’s open to getting remarried one day and having “wonderful beautiful African children.” Of course, Williams also dug into the drama between Braxton and her sisters, but the “Love and War” singer said she’s not angry at her siblings. “It’s really difficult being in business with your family,” she said before insisting she was not “pissed off” at her sister, Traci Braxton, for continuing to film their reality show when the other sisters pulled out. Braxton did, however, have a few words about what prompted her to call Iyanla Vanzant — who was brought in to help heal the relationship between the Braxton women — a “devil.” “I just didn’t think her tactics, or the way she usually goes about things, worked for my family,” she explained. 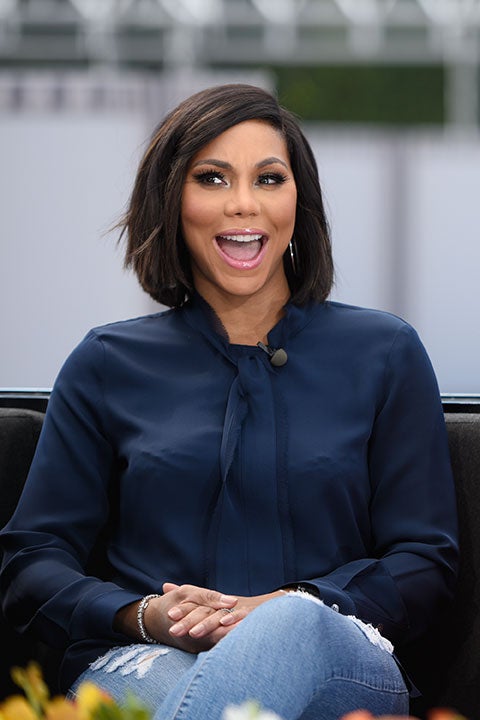 “This is not a situation where we needed to go back and fix things; we just needed to talk about things. It was a little too abrasive, and a little bit too much, and it was uncalled for,” Braxton said. During the conversation with Vanzant, which was filmed for the Braxton Family Values season finale, Braxton said she walked out because the life coach brought up some uncomfortable memories from the past. “This is not a typical Tamar meltdown, walkout situation. I’ve been battling myself about whether or not I really want to say what happened,” she told Williams, who, of course, encouraged her to share.

Today Wendy asked me what happened at my sisters meeting and why did I walk out. Since someone there decided that they would ask me about something so private, so embarrassing, so secretive in front of EVERYONE that was there, I felt like my life was flashing before my eyes and IMMEDIATELY started to cry. Not because someone decided to allow someone else to tell MY SECRET, not because I was asked if it were True in front of a hundred strangers, but because once again my right to choose was taken from me all over again. I decided to Tell Wendy and the world MY secret, MYSELF that I have been a victim of abuse not once, twice, ten, but multiple times by multiple “family members” I’ve never told ANYONE other than Two people in my life and they both have held this close to them. One Being the man that I am with now and EVERY, SINGLE DAY he says I’m so beautiful and my scars makes me even more attractive. I felt that because this has happened to me recently, that something HAD to be done about people who DID know and tried to make People embarrassed and ashamed about something that has happened to them!!! I never EVER again want anyone to feel so little and so small or even ashamed about something they had no control over. I wanted to create a space where you can tell your OWN story with out anyone commenting or making you feel ashamed EVER again!! Go to and tell your story and empower yourself starting today! I wanted you to know that no matter how many scars you have... you are the PRETTIEST 💕 I love you all so much noneedTBshame.com

“I’m Tamar and I’m real,” Braxton continued. “A lot of things happened in my childhood that I was too afraid to talk about, or too ashamed to talk about. But the truth of the matter is I have been molested by both sides of my family.” The bombshell seemed to shock Williams and the audience, but Braxton forged ahead. “And it’s nothing I ever talked about and I never thought that I would sit around the table with Iyanla, who’s here to talk about me and my sisters and our problems, to bring that up and sex shame me, basically in front of everybody,” Braxton explained. While it’s unclear what actually happened between Braxton and Vanzant, the singer said she’s in a good place in her life, and with her singers. And that’s all that really matters.