By Britni Danielle · Updated December 6, 2020
CBS This Morning host Gayle King’s interview with embattled singer, R. Kelly, broke the internet. The conversation marked the first time Kelly answered questions since he was charged with 10 counts of aggravated criminal sexual abuse, and viewers had a lot to say after it was aired. At one point during their chat, Kelly became frantic, yelling into the camera that he was being “assassinated” and that his accusers were ruining his life. When a photo of the singer’s outburst circulated on social media, most people marveled at King’s calm demeanor. Now, the veteran journalist is sharing what she really thought of Kelly’s antics. “I was not scared. I never thought he was going to hit me,” King told O Magazine. In spite of not being afraid of Kelly, King admitted that the image looked “scary” and her loved ones called to check on her. “After, Oprah and my kids Kirby and Will called me to ask if I was okay because it looked scary,” she said. “But I was never worried he was going to hurt me. I was more worried that he was going to get up and leave.” One reason King maintained her composure during Kelly’s outburst was that she didn’t want the interview to end prematurely.

Here we go @rkelly says he welcomes the opportunity to tell HIS side of the story.. we give him the floor @cbsthismorning swipe left for his many reax

“What I was really thinking to myself was: I’m not done with this interview, so I’m going to let him have his moment,” King explained. “If I stood up even to comfort him, that could have been his invitation to say ‘This is over.’ So I didn’t interrupt his anger and let him have that.” While many people wondered why Kelly agreed to speak to King in the first place — especially after his tantrum — King said the singer’s team actually contacted her. “His team reached out and said he was interested in talking, and he was interested in talking to me,” she explained. “I had some reservations because I was thinking ‘What are we gonna get? He’s just going to deny it!’ But I did it because I at least thought there would be some…if not contrition, then at least acknowledgment that ‘This is a bad situation, and I have made some mistakes.’” 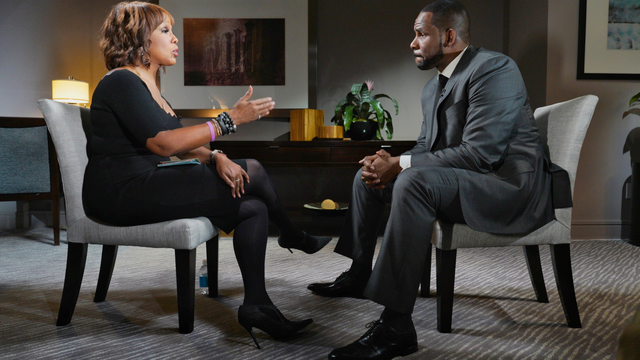 King hoped Kelly would reflect on his past, but instead, he claimed to be a victim of some sort of wide-ranging conspiracy. “He seems to believe everyone is out to get him…that everyone is after money or book deals or TV deals, and that even the parents of these women are lying,” King said. “As you saw, he says he’s only guilty of one thing: Having a big heart.” King and Kelly spoke for over 80 minutes, but only a short portion of their conversation made it to air on CBS. But King promises it won’t be the last we see of their interaction. “Yes, we had a lot to discuss,” she teased. “and there’s more coming.” In fact, CBS is now promoting more of their explosive interview will air on the network Friday night at 8 p.m. ET.