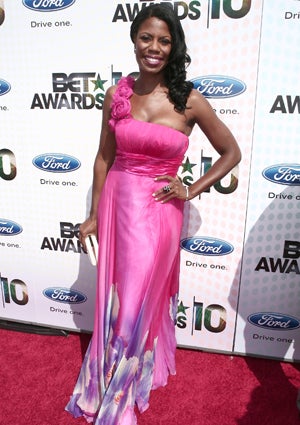 The Black woman we all love to hate has decided it’s time for her to find love. Omarosa Manigault-Stallworth, the notorious villain of the first season of “Apprentice,” has stretched her 15 minutes of fame and is now starring in her own reality series. The show, called “The Ultimate Merger,” is produced by real estate mogul Donald Trump, aired its second episode on TV One last night. Although the premise of the show will have Omarosa on the hunt for love, it wouldn’t be true to her character if cash money wasn’t involved. Omarosa describes the show as a “a mix between ‘The Apprentice’ and ‘The Bachelorette,'” an unscripted drama series that she claims will be the first of its kind. Mix a little Omarosa with a few bright lights, cameras, and what we are asked to believe is “reality” TV, and the result — entertainment or uproar. Omarosa spoke with ESSENCE.com about serious love, Al B. Sure, and her image. ESSENCE.com: What does “The Ultimate Merger” mean? STALLWORTH: It’s a serious approach at love, because love is serious business. The reason why most marriages fail is because people don’t look at it as a merger between two independent entities, forming one company or partnership. If you look at it that way you can take an honest approach to marriage. ESSENCE.com: “Serious approach at love,” are you saying other reality love shows aren’t that serious? STALLWORTH: Other franchises have done very well, but I don’t waste my time talking about anybody else’s projects. The other shows are very different formats. We’re not giving out chains, flowers, or writing poetry… my guys are required to sign a prenuptial, I don’t know anything more serious than that. ESSENCE.com: So the show doesn’t include a lot of romance, you and your love interests are all “business?” STALLWORTH: I think people get to caught up in the romance side, and I was in a marriage that I was romanced. However, I never asked him his theory for raising children, or for a marriage contract that states clearly who would be responsible for what. There is a significant aspect of romance and fun on the show,  but there is also deep discussions about God and family — 40 percent romance, 60 percent business. Donald was always there to remind us what this show was about. ESSENCE.com: You have all Black contestants… STALLWORTH: We tried to have to some diversity and be PC, but the truth of the matter is like I love Black men. On the mainstream shows, they have their tokens, but they are always the first to be eliminated. On my show we have one Cuban American and one Caucasian man. I gave these guys a chance to show me why I should step out my comfort zone and date a White guy. ESSENCE.com: You’re known for being strong and intimidating. Do you show a softer side on the show? STALLWORTH: Although I was very cynical about these love shows, I surprised myself that I show vulnerability. When I got down to my final three, and I had to let two go, it did get to me because I really did care about these brothers. ESSENCE.com: One of those brothers on the show is singer Al B. Sure, a man you dated back in the day. How serious was that relationship back then? STALLWORTH: When I was introduced to Al B. at this Hollywood party, I was so enamored that Al B. was showing interest in me. We dated, I don’t know if I was the only relationship he had at that moment, I certainly wouldn’t had mind then to take it to another level, but Al B. was being Al B. ESSENCE.com: Does that work for him or against him now that he’s on the show? STALLWORTH:  Al B. came on the show wanting another chance, because he says that at that time there was a lot going on in his life. It’s interesting, I can truly tell you I love Al B. Sure, I have really strong feelings for him, and I know the feelings are mutual. I don’t know how fair it was for the other contestants…(laughs) ESSENCE.com: Omarosa, it sounds like Al B. won… STALLWORTH: (laughs) I love Al B, I love spending as much time as I could with Al B., I have incredible feelings for him, and it’s wonderful the time we spend together. ESSENCE.com: Do you think you’ve done too many reality shows? STALLWORTH: That’s like asking a R&B artist how many albums are you going to make. I’m in the business of unscripted television, there should be no limit on creativity. I won’t limit myself. ESSENCE.com: Does it bother you that many Black women dislike you? STALLWORTH: It does, because it’s so important for sistahs to embrace each other, and lift each other up. ESSENCE.com: How do you feel people are going to respond to this show, based on your past reputation and image? STALLWORTH: I was that tough woman in business, some people liked me and some didn’t.  There’s so much more to me than that. I walked out of that “Apprentice” board room seven years ago. Now I’m a minister, I do missionary work in Africa and Haiti, I’m more than what meets the eye. I want to get out of the box of being that bad girl. ESSENCE.com: You built that image, though… STALLWORTH: At that time, that was how I was feeling. I was 28, a young executive trying to win a million dollars, I don’t regret it.  However, I’m wiser now at 36, I know more. If I know better, I do better. I can’t change what I did at that time because that is what I felt. I wouldn’t ever sit and say I don’t like a person, I would say I don’t like what a person did on that show. Reality television is a part of show business, you got to show something to make it work.