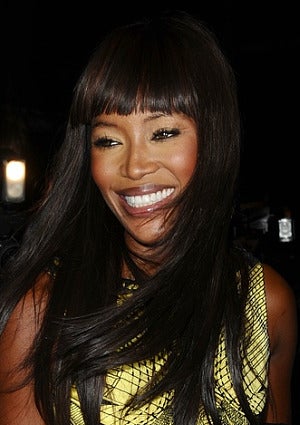 After a few unseemly public episodes (including being accused of hitting her boyfriend’s driver and a tussle with an ABC News reporter who inquired about the supermodel’s blood diamond), Naomi Campbell showed up on Monday’s episode of the “Oprah Winfrey Show” to tell her side of the story… The British beauty candidly discussed her cocaine addiction, abandonment issues and seemingly bottomless temper — at which point Oprah had her sign a “No Phone Throwing” pledge. Their conversation took on such a raw, confessional turn, that after a commercial break, Oprah told viewers that “Naomi Campbell went into an ugly cry.” It wasn’t all deep, though — Naomi also discussed her numerous affairs with boldface names like Robert De Niro and Usher, and introduced her boyfriend of two years, Russian billionaire Vladimir Doronin, who was seated in the audience. All in all, her time on Oprah’s couch made for fascinating television. We vote for a Naomi reality show!