By Britni Danielle · Updated December 6, 2020
In Netflix’s new hit series, The Umbrella Academy, Mary J. Blige kicks major ass. In the adaptation of Gerard Way’s comic book, the ESSENCE Festival headliner plays Cha-Cha, a time-traveling assassin who is assigned to kill a member of the academy before he can save the world. Cha-Cha was a serious departure from Blige’s previous roles, and forced her to stretch both as an actor and performer. She even did a lot of her own stunts, which meant hanging from wires and picking glass out of her face. Though very challenging, the Grammy winner had a great time. “I had a ball playing a bad guy,” Blige told ESSENCE. “It was so therapeutic.” “I needed to be that woman that didn’t care about anything, that didn’t care about anyone,” Blige continued. “I needed to release that into her because sometimes that’s how you feel. You feel like kicking everybody’s behind.” 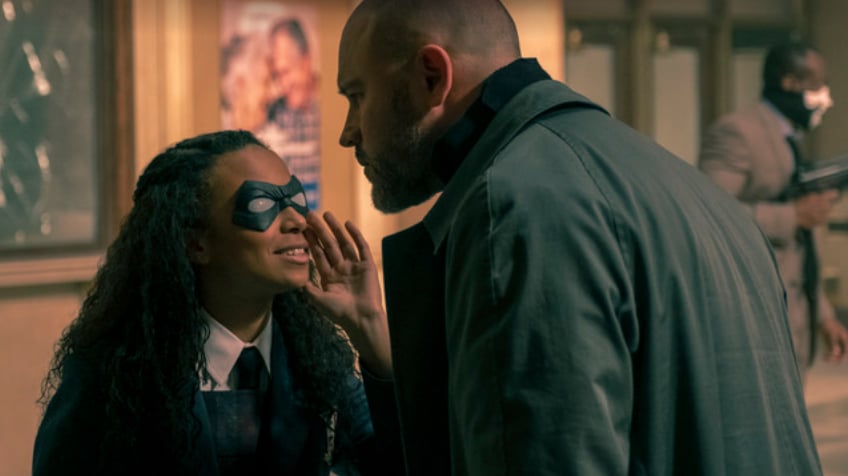 Emmy Raver-Lampman in "The Umbrella Academy"

Since dropping earlier this month, The Umbrella Academy has reportedly become one of Netflix’s biggest shows. Its impressive cast includes Ellen Page, Cameron Britton, Tom Hopper, David Castañeda, Robert Sheehan, Aidan Gallagher, and newcomer Emmy Raver-Lampman, who came straight from Broadway to shoot the series. In the show, Raver-Lampman plays Allison Hargreeve aka Number Three, who can manipulate reality by lying. While Raver-Lampman starred in the breakout musical, Hamilton, The Umbrella Academy was her first on-screen role. “I jumped in with both feet and have amazing castmates,” she said, while Hopper, sang her praises. “She was incredible,” he said. “She was so open to learning…and smashed it to bits.” The Umbrella Academy is streaming on Netflix right now.
TOPICS:  Mary J. Blige The Umbrella Academy