Sometimes calling in the new means leaning on tradition. We’ve found delicious recipes to bring you good fortune this year.

ESSENCE reader Mary Pryor, 34, spent her childhood learning to cook from her mother’s mother, Bernice Pryor. “She taught me how to clean chitlins when I was 3 and how to catch chickens at 11,” Mary says. Since her beloved grandmother’s passing in 2007, Mary has continued to make Bernice’s legendary greens each New Year for friends in Harlem. “Greens represent [bringing] wealth into one’s life for the New Year. My grandmother taught me how to make a family-style meal and people smile with only $10,” Mary says. “We start each year in a special way.” Try her family recipe (below right), along with Soup Joumou by Top Chef alum Ron Duprat, a tasty upgrade on black-eyed peas by eco-chef Bryant Terry and pork chops with a twist by famed restaurateur Marcus Samuelsson.

Salt and black pepper to taste

To make Haitian épice, dice vegetables. Place them, along with oil, vinegar, Scotch bonnet and seasoning, in food processor. Mix to a paste, then set aside. Put garlic, scallions, parsley, thyme, shallot, Scotch bonnet, épice, salt, pepper and ½ cup water in a blender and puree. Mix with beef in a bowl, then cover with plastic wrap and refrigerate at least 4 hours or overnight. Remove beef from marinade and dry with paper towels; set aside. Heat oil in an 8-quart saucepan over medium-high heat. Add beef and cook, turning as needed, until browned, about 8 minutes. Add stock and bring to a boil. Reduce heat to medium and cook, stirring occasionally, until beef is tender, about 1½ hours. Add carrots, celery, leek, onion, potato, turnip and cabbage. Cover slightly and cook, stirring occasionally until vegetables are tender, about 20 minutes. Meanwhile, put squash in a 2-quart saucepan and add 2 cups water. Bring to a boil. Reduce heat to medium-low, cover and cook until squash is tender, about 10 minutes. Drain, reserving ½ cup liquid, and transfer squash and liquid to blender. Puree and set aside. When vegetables are tender, uncover and stir in squash puree. Cook, stirring occasionally, until soup is slightly thick. Serve warm. 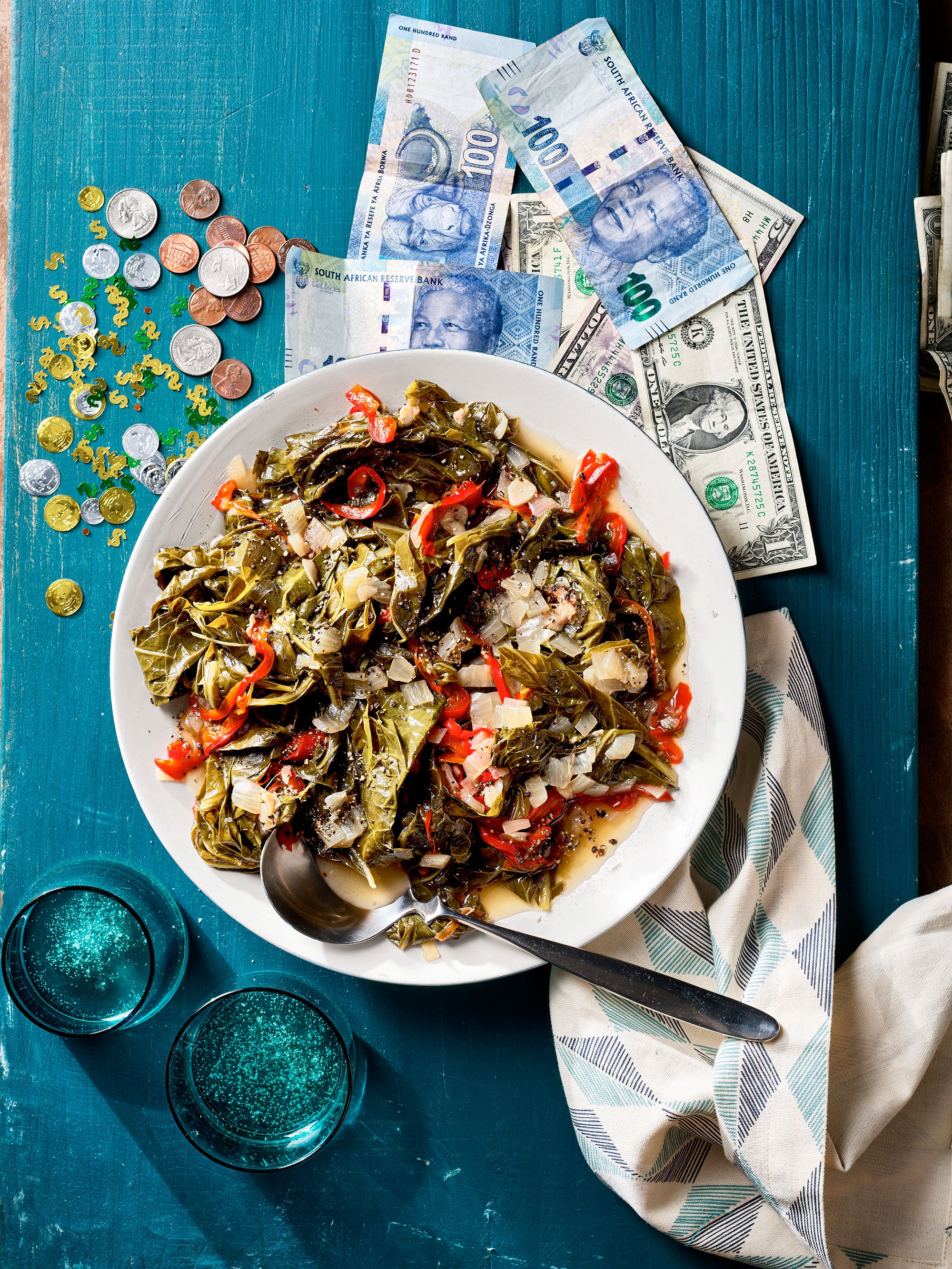 Pick off stems of collard greens; triple-wash and soak for 1 hour. (Note: Some chefs like to stack their collard greens and cut the leaves in half after cleaning.) In a medium pot, boil 4 cups water, then add turkey or pork neckbones and a pinch of sea salt. Cook over high heat until parts are almost tender. Then cold-rinse and transfer to a large stockpot. In the pot, heat 3 tablespoons olive oil, then add garlic. Using a spatula, toss until golden brown. Pour in about half the turkey stock and water from neckbones, then heat. Toss in greens and bring to a boil. Reduce heat to a simmer. Add shallot, red peppers, onion and the remaining olive oil, then reduce heat. Cover with a lid and simmer for 1 to 2 hours, adding pepper and salt to taste. (For best results, simmer on low for 2 to 3 hours.) Be sure to pour in the remaining stock and water as needed, about 1 cup each time until preferred tenderness. Add a dash of apple cider vinegar, if desired. 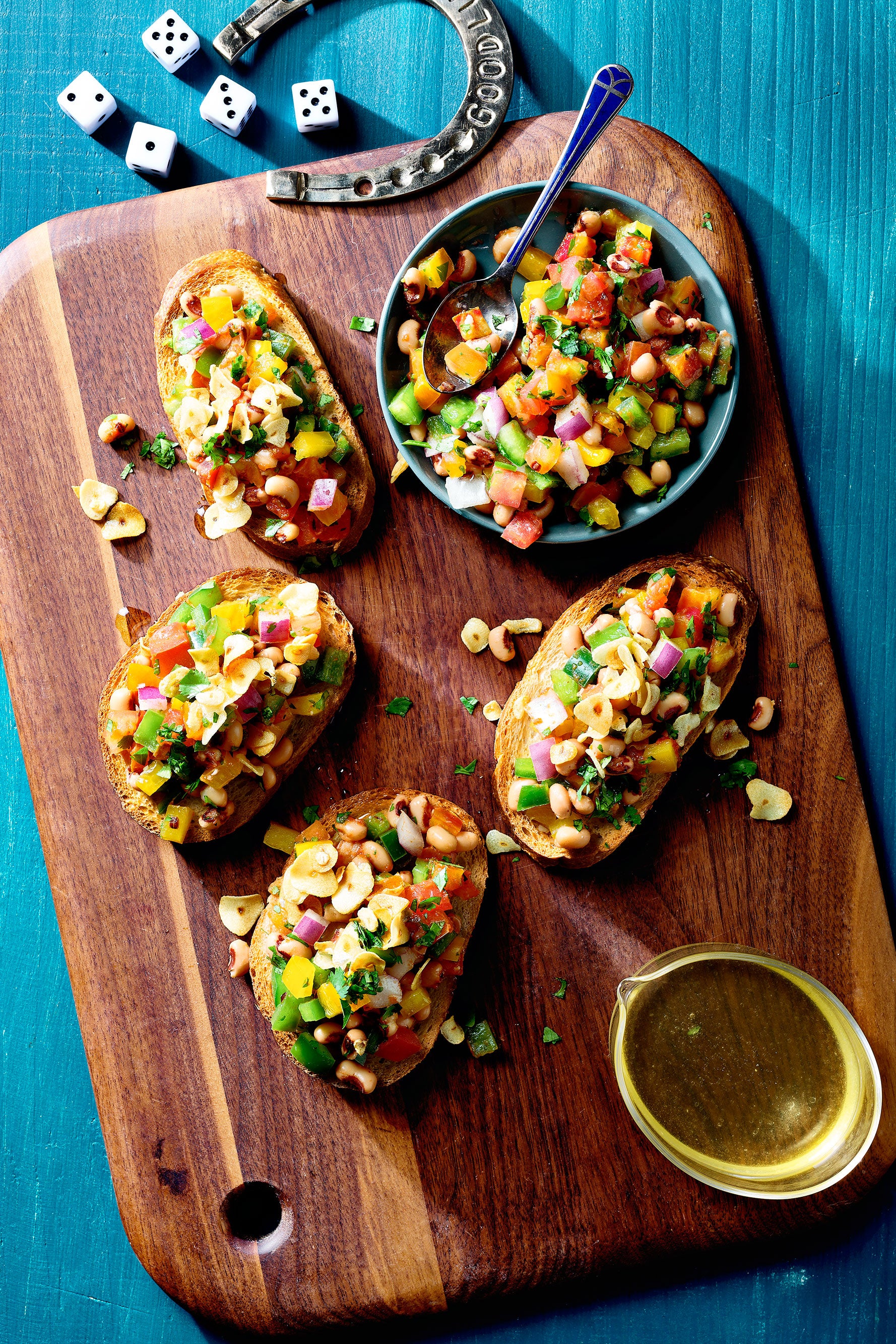 1 large loaf rustic bread, cut into about 12 ½-to- ¾-inch-thick slices

Put sun-dried tomatoes in a small heatproof bowl and add boiling water to cover. Place lid over bowl and let tomatoes soak for 5 minutes. Drain black-eyed peas and rinse well. Transfer to a medium saucepan and cover in water by 2 inches. Bring to a boil. Decrease heat to medium, skim foam and partially cover. Cook until beans are soft but still firm, 40 to 50 minutes. Stir in 1 teaspoon salt and simmer for 10 minutes. Drain in a colander, rinse under cold water for 1 minute and let cool. Warm oil in a medium-size skillet over low heat. Add garlic and cook, stirring occasionally, until crispy and golden, 8 to 10 minutes. Strain through a fine-mesh sieve into a bowl, and reserve garlic and oil separately. Drain and finely chop sun-dried tomatoes, then place in a blender. Add lemon juice, vinegar and the remaining salt. While blending, pour in ¼ cup garlic oil in a slow stream until mixture is smooth and creamy. Transfer to a large bowl. Add black-eyed peas, tomatoes, bell peppers, onion, jalapeño and ¼ cup cilantro. Stir gently until well combined, then cover and let rest at room temperature for 1 hour. Preheat the oven to 400°F. Season black-eyed pea mixture with black pepper and, if desired, more salt. Lightly brush each slice of bread with some garlic oil. Put bread on a large baking sheet and bake until lightly browned and toasted on top, 6 to 10 minutes. Top each slice with 2 heaping tablespoons black-eyed pea mixture. Garnish with crispy garlic and the remaining cilantro. Drizzle with the remaining garlic oil and enjoy. 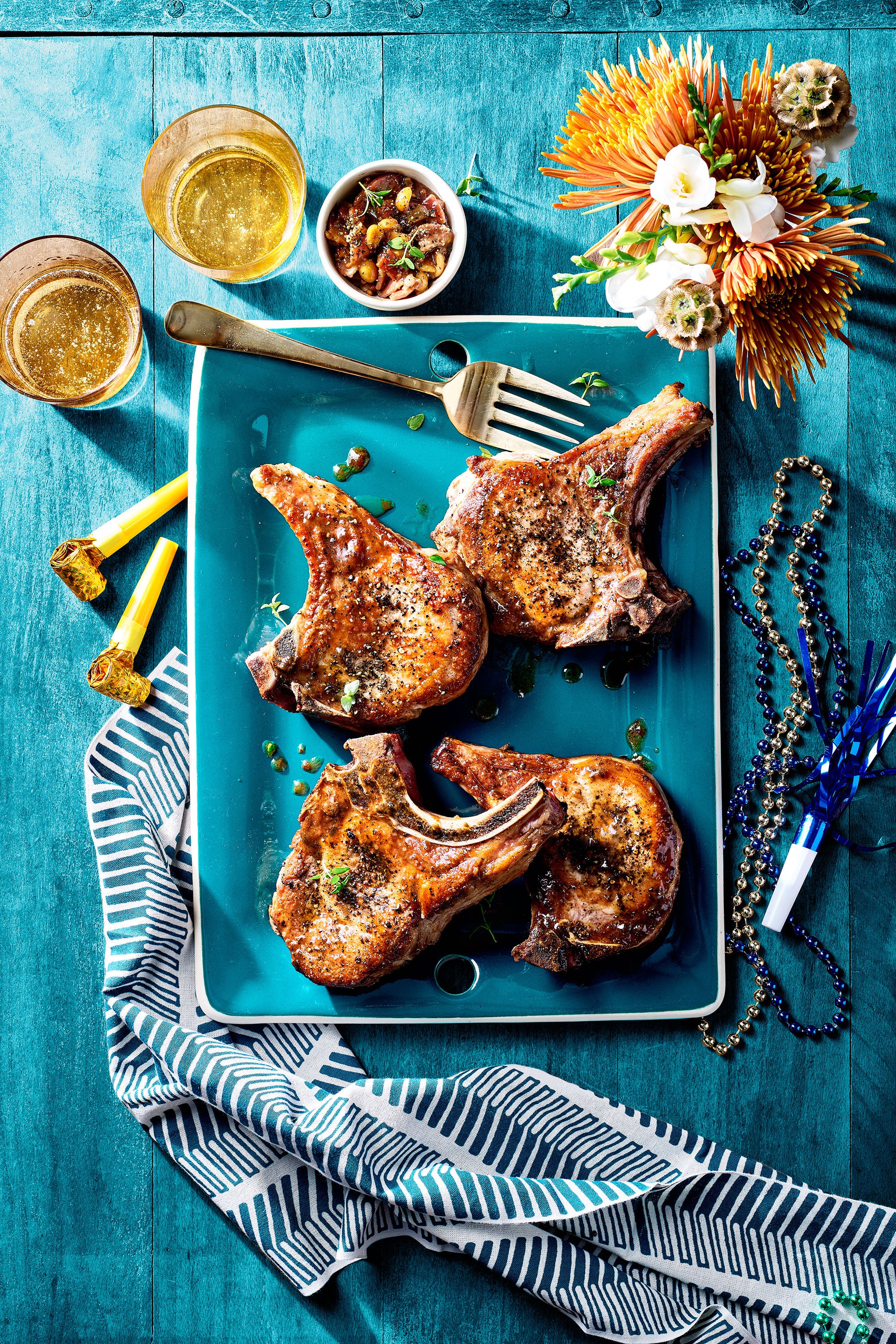 Coarse salt and pepper to taste

Cook bacon and peanuts in a skillet over medium heat until bacon is crisp, 12 to 14 minutes. Transfer bacon and peanuts to a bowl with a slotted spoon. Pour off bacon grease except 1 tablespoon. Add shallots, garlic and mustard seeds, and cook, stirring, about 2 minutes. Add wine and simmer, stirring until the brown stuff dissolves. Add chicken broth, pickle juice and thyme. Turn heat to medium-low and simmer until reduced by two thirds, about 25 minutes. Stir in pickles, peanut butter, butter, and bacon and peanuts. Season with salt and pepper to taste. Keep warm; set aside. Mix 2 tablespoons olive oil with jerk sauce. Rub both sides of pork chops with it. Heat 1 tablespoon oil in a cast-iron skillet over medium heat. Add chops and cook until they reach 140°F, around 7 minutes per side. Let chops rest for 5 minutes, then serve with sauce.