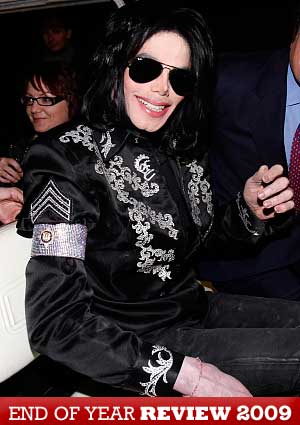 Perhaps no other musician in recent times has gotten a better send off than Michael Jackson. After his untimely death in June, ESSENCE.com kept abreast of all events surrounding Jackson and his family. It’s now the end of 2009 and the name Michael Jackson is still as topical, proving that the King of Pop will forever live in our hearts and minds.

Join us as we remember the memory of the dancer, the trendsetter, the entertainer, the legend that was Michael Jackson.

Michael’s changing face through the years.

An intimate look at Michael Jackson before he became the King of Pop.

Find out who were the ladies who rocked Michael Jackson’s world.


HIS MUSIC
Michael Jackson kept us rockin’ through the years. Find out his Top 25 songs.

The real deal on why Michael Jackson is the undisputed King of Pop.


HIS FAMILY
Throughout his life Michael Jackson’s little sister Janet Jackson was always his heart.

Janet Jackson opens up about her big brother.


HIS FANS
Fans around the world remember the King of Pop.

These celebrities were fans before they were famous.


HIS LEGACY
Michael Jackson’s death is the top entertainment story of 2009.

Joe Jackson says his son may be worth more dead than alive.

These Fortune 500 Companies Have Joined Forces To Address He...

Calling all HBCU Students, Are You Ready to Rise Up?

Meet The Woman Who's Exposing High School Students To The Va...

These Creatives Displayed Their Latest Fashion At The Essenc...