We’ve long admired Yaya Dacosta for her journey from ANTM finalist to celebrated actress. In the years since her initial television debut, she’s made huge strides in Hollywood, most recently snagging a starring role on NBC’s Chicago Med.

The show’s second season premieres tonight and with a tuberculosis diagnosis hanging over April Sexton’s head, Yaya is anxious, like the rest of us, about her character’s future.

“I definitely vaguely knew what it was, but i didn’t know anyone with it,” she tells ESSENCE of the surprise plot twist. “I didn’t know how long, what the chances are of being cured, how long a cure would take, the different levels of infection, whether you’re carrying it and not contagious or are contagious.”

As expected, the mother of one has learned a lot about the ins and outs of medicine; especially as someone who grew up only using western medicine as a last resort. Yaya recalls just a handful of times she and her siblings were prescribed antibiotics as a child.

“My father was an acupuncturist and they really lean towards homeopathic remedies first and as someone who hadn’t been in a hospital since I was born, I was completely ignorant to everything about what I’m learning,” she says.

Having accomplished a new balance between eastern and western practices, those same habits have transferred to her daily beauty routine. Although she swears by a short list of popular products like Jane Carter’s Curl Defining Cream, Origins’ Nature Gentle Dermabrasion and Schmidt’s Deodorant, the TV and film star still likes getting her hands dirty with DIY recipes that grab everyone’s attention.

“I’ll show up in the hair and makeup trailer and after having tried something new and the hair stylist is doing my hair, she’s like, ‘Oh, it feels good today, what did you use?’ and I’m like, ‘Oh, well I just made this flaxseed gel (laughs)!  Just boil some flax seeds and sometimes you can mix in other things like elm or marshmallow root or even sea moss.”

As impressed as we are by her natural beauty expertise, the 33-year-old also gives simple, but poignant love advice.

With her Chicago Med character attempting to move forward with one relationship while another remains complicated, Yaya can’t help but pass some words of wisdom unto her fictional counterpart. 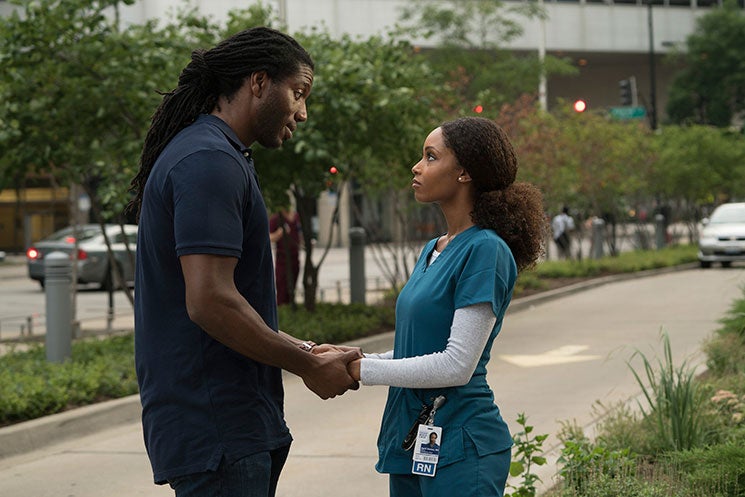 “I feel like if it were up to the fans, it would be all about April and Severide (played by Taylor Kinney),” she dished, “but Tate (played by Deron Powell) is persuasive and persistent and he’s trying to stick around.”

“I think a lot of women sacrifice being with themselves in order to be with a man. Be with yourself. That’s my advice.”