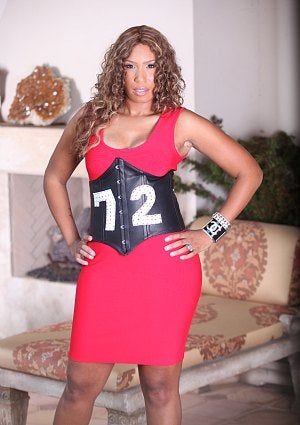 If you’ve been tuning in to “Football Wives” you know that Chanita Foster — wife of former Denver Broncos player George Foster — isn’t fond of Pilar Sanders — wife of Deion Sanders. Here’s one incident that could have fueled the feud. According to TMZ, in September, while taping a scene for “Football Wives,” Foster was rushed to the hospital when she experienced a headache so severe that she “couldn’t feel her legs and had trouble standing.” Although doctors originally thought Foster had a brain aneurysm, they ultimately diagnosed her with dehydration. Well apparently all the wives on the show visited Chanita in the hospital and brought her flowers — all the wives except Pilar. That ticked Chanita off. But maybe it was all a big misunderstanding. “Pilar reached out to Chanita but she never got a reply,” a source close to Sanders told TMZ. “Plus Deion had called and told her about a very romantic evening he had planned for them and asked if she’d come home. So she did.” Well have you seen Deion Sanders? Would you go home too or would you have delivered the flowers?