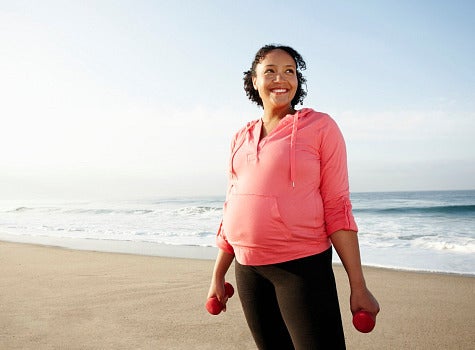 So let’s say you’re in your first trimester and in the height of your morning sickness. You’re trying to keep up an exercise routine of at least 30 minutes a day, as recommended by most doctors, but honestly you’re cranky, nauseous and swollen in places you never knew you could be, so chances are you’re not making it to the gym. You exercise less and less and eventually you stop all together. Who can blame you, really? Turns out you’re not alone: 56% of women (or three in four) do not get enough exercise during pregnancy, according to a study out of the University of North Carolina at Chapel Hill. Of the 1280 women who participated in the study, 23% reported getting some form of exercise and the women in the first trimester were more likely to exercise than those in the third. Perhaps the new findings on the benefits of exercise will encourage us to shift our thinking about working out while preggers. Let’s take a recent New Zealand study that found that regular exercise helps reduce a baby’s weight at birth. Findings from that study concluded that moms who don’t exercise are more likely to give birth to large babies, putting them (the baby) at a higher risk for childhood obesity. In a random test of 84 first-time mothers, researchers found exercise did not necessarily alter the mother’s weight, however, those who didn’t exercise often gave birth to children an average of five ounces larger. It doesn’t end there: According to an Australian study, exercising shortly after pregnancy can help stave off post-natal depression by up to 50%. Scientists studied two sets of mothers: those who exercised and those who didn’t. The one’s who exercised were half as likely to have post-natal depression after being evaluated through the Edinburgh Postnatal Depression Scale than those who didn’t. So there you have it, exercising during pregnancy can not only help you stay fit but also helps your baby stay healthy and lessens your chances of having post-natal depression. If only a 30 minute nap didn’t sound way more fun than a step machine to a pregnant mom. Read More: