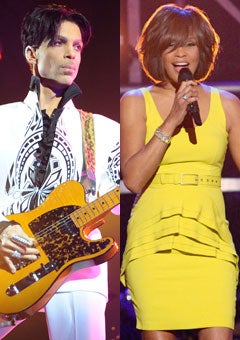 Another day, another rumor. This time it’s Prince who is denying rumors that he banned Whitney Houston from his concerts. The Purple One released a statement saying Houston is welcome to his shows, “4 all of eternity.”

Reports claimed Whitney’s “erratic behavior” had caused Prince to ban her from his shows. A source now tells TMZ there is no ban and that whoever put out the mandate did not have the authority to do so. “Someone could have taken it upon themselves to say Whitney was banned, but it did not come from Prince,” they said.

This must have come as dreadful news to Houston, who checked into rehab this week. We’re so glad it’s all cleared up, because we loved watching Nippy and daughter Bobby Kristina dancing at Prince’s concert recently.