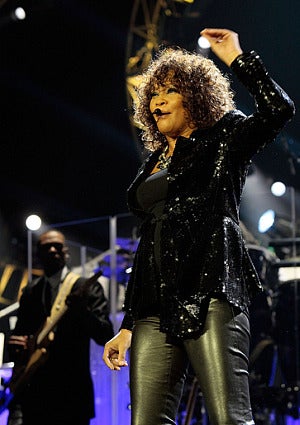 Has Whitney Houston lost her voice forever? Finishing up the European leg of her “Nothing But Love” tour, the R&B diva left London fans at the O2 arena disappointed with croaky vocals and what some have called a halfhearted performance last night. According to the UK’s “Daily Mail,” Houston stopped singing often to catch her breath, cutting her performance of “The Greatest Love Of All” short after just a few verses. The 46-year-old blamed her hoarseness on a recent respiratory infection and also admitted to her 20,000 fans that she couldn’t hit the high notes. According to the “Daily Mail” Houston fumbled her way through the beloved hit, “I Will Always Love You,” and then told the crowd, “She don’t want to come, my soprano friend. Sometimes the old girl sings, but not tonight. I want to do it, but she doesn’t want to. …She’s getting a little …temperamental, even.” What if her soprano friend doesn’t want to come and sing any more, at all? We’ll still love you, with or without the “old girl,” Whitney. Relatad stories: