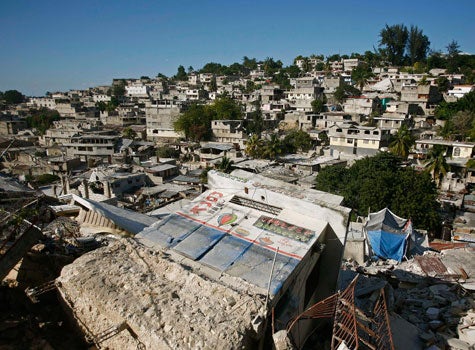 The people of Haiti desperately need help after the island was struck by a major earthquake on Tuesday, with the Red Cross estimating that up to 3 million people require emergency relief. In the wake of this human tragedy, some public figures have responded not with compassion but vile accusations.

Televangelist, and former Republican presidential candidate, Pat Robertson sparked a firestorm with his assertion, on the Christian Broadcasting Network’s The 700 Club, that the earthquake was caused by a “pact with the devil” made by Haitians. Radio host Rush Limbaugh jabbed that President Obama is using the earthquake to look compassionate and, adding, “We’ve already donated to Haiti. It’s called the U.S. income tax.”

“In times of great crisis, there are always people that say really stupid things,” Gibbs said, in response to a question about Limbaugh, after similarly addressing Robertson’s remarks. “I don’t know how anybody could sit where he does, having enjoyed the success that he has, and not feel some measure of sorrow for what has happened in Haiti. I think to use the power of your pulpit to try to convince those not to help their brothers and sisters is sad. My sense is that most people, though, because they understand we’re part of an amazing world, won’t listen and instead will seek to help those that they know, because it is through no fault of their own, have suffered an unspeakable tragedy.”

In addition to the broad recovery efforts that President Obama laid out this morning, Gibbs explained that the President former presidents Bill Clinton and George W. Bush to run a fund-raising effort for Haiti. Both have agreed to help.