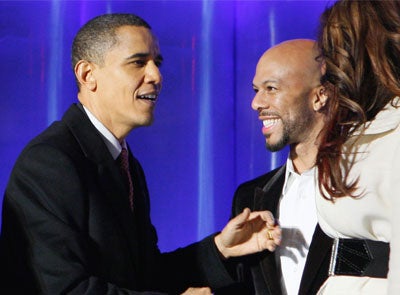 There’s never a dull moment at the White House. Yesterday, the President had his hands full defending Common’s participation in the White House’s poetry event (pictured above).

Why all the huff and puff, you ask? Conservative critics point to Common’s more “controversial” lyrics, specifically one song where he states, “I hold up a peace sign but I carry a gun,” and another in which he praises Black Panther leader Assata Shakur, who was convicted for killing a police officer, according to FOX News.

“While the president doesn’t support the kind of lyrics that have been raised here, we do think some of the reports distort what [Common] stands for more broadly in order to stoke controversy,” said Jay Carney, a spokesman for the White House. Carney went into detail claiming that the President appreciates the way Common, real name Lonnie Rashid Lynn Jr., engages children to read poetry “as opposed to some of the negative influences of life on the street.”

For all of the rap fans out there, we all know Common is far from a “thug” or a “gangsta rapper” as many are labeling him. In fact, we know him to be one of the most positive emcees in the game today.

Do you think inviting Common to the White House’s poetry event is a big deal?