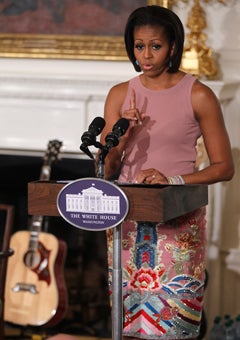 On Wednesday, the White House welcomed writers, artists and musicians to observe the importance of poetry.

The day started with a workshop in the State Dining Room for 77 student poets from all over the country.

They sat with notebooks in hand, jotting down key points as Collins, Dove, and other writers gave them advice. Some even wore grey, pink, or red T-shirts that spelled out “Poet” on the front. The First Lady of Mexico, Margarita Zavala, and actress Kerry Washington looked on as the poets encouraged the students to “find their voice” and “make the language your own.”

Mrs. Obama, wearing a pink tank top and embroidered skirt, said she was a budding writer and credits her love of writing for much of her success. “Whenever I was struggling in school, or didn’t want to go outside and deal with the nonsense of the neighborhood, I would write,” Mrs. Obama said. “…And when you write poetry, you’re not just expressing yourself. You’re also connecting to people. And that’s the key to everything we want to be and do as human beings — is our ability to connect to one another.”

Later that evening, the President gave opening remarks in the East Room before the participants performed. “A great poem is one that resonates with us, that challenges us and that teaches us something about ourselves and the world that we live in,” he said.

It was the President and First Lady’s decision to invite rapper Common to this event that drew the most attention. Critics targeted an HBO special where Common rapped about then-President George W. Bush, saying, “Burn a Bush cos’ for peace he no push no button.” Even Herman Cain, an African-American Republican who may run for President, weighed in. “I, or my wife, or my family would have never invited him to the White House — they can defend it all they want to, but it’s not going to change the fact that they have an arrogant disregard — an arrogant disregard — for many of the values that most of us believe in, in this country.”

However, on that night, Common said he walked into the White House with “love on my sleeve.” His performance featured snippets of Martin Luther King, Jr.’s speeches and he spoke about violence against children, becoming a beacon of light for those in dark alleys and the rise of the first African-American president.

He finished with “one King’s dream, he was able to Barack us.”