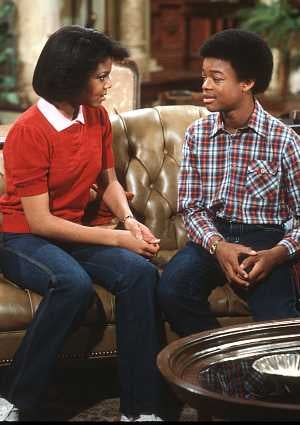 It’s been 25 years since “Diff’rent Strokes” was canceled and most of us can still call up Arnold Jackson’s famous expression (“Whatchu’ talkin’ ’bout Willis?”) as quickly as we can recall that sad episode where Penny’s (Janet Jackson) mother on “Good Times” (a 70’s show) burnt her with an iron. We loved Charlene (Jackson) and Willis Jackson’s (Todd Bridges) teenage crush and cooed along with Arnold when he went on his first date. For years America had white-bread television shows like “Father Knows Best” so when “The Cosby Show” came around presenting a positive image of a strong-willed Black father (James Evans, Jr. on “Good Times” was problematic to some) and his equally head-strong wife and children, we breathed a sigh of relief that the world was getting a glimpse of an African-American reality that had largely been absent from television. But why the nostalgia for all things 80’s sitcoms? Maybe because we grew up with them (and we’ll always yearn for reminders of our childhood), but also because we loved taking in some life lessons (the “Diff’rent Strokes” episode on pedophilia is especially vivid) mixed in with laughs. What are your favorite of 80’s TV sitcoms?