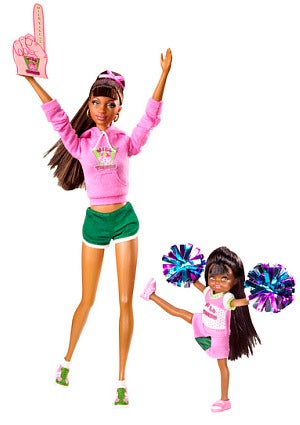 A Walmart store in Louisiana caused a stir for selling a Black Barbie at half the price of White Barbie last week. The Black Barbie was $3 and the White, $5.93. A spokesperson for Walmart said the dolls weren’t selling well, hence the price cut. But sociologists and analysts are taking issue with the retailers sale and say it sends the wrong message about Blackness. “The implication of the lowering of the price is that’s devaluing the Black doll,” Thelma Dye of the Northside Center for Child Development in Harlem told ABC News. Retail analyst Lori Wachs says Walmart needed to look at the bigger picture. “I think there are certain things companies have to be sensitive about and clearly this was one of them,” retail she told ABC. In response to the controversy Walmart the Black Barbie’s dolls are back to being the same price as the White dolls, $5.93. Last year after President Obama’s inauguration “Good Morning America” conducted an informal study of the perceptions of Black children towards Black dolls. Out of 19 children surveyed, 42% said they would play with a Black doll, but nearly half thought White dolls were prettier. The results weren’t so different when 23-year-old African American filmmaker Kiri Davis conducted her own survey in her 2005 documentary “A Girl Like Me.” In it Davis asked 21 young Black children which dolls they preferred and most chose the White dolls by overwhelming majority. Now these studies may just be that, focused analysis of a select group of individuals and may not necessarily reflect the norms of the African American community overall. Do you think that the Walmart price cut was a result of low sales or racism? Read More: