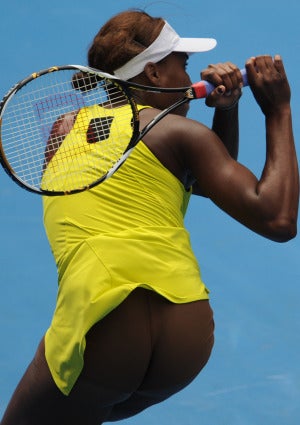 Usually it’s tennis phenom Serena Williams who attracts more attention for her flashy on-court attire, but at this week’s Australian Open, it was her equally talented big sister Venus who stole the show. Fans were shocked to see the sixth-seeded tennis player do battle while seemingly showing her behind. During her matches, Venus wore a self-designed yellow dress with a chest panel and shorts that matched her skin color so well it gave the illusion that she wasn’t wearing anything underneath. Unconcerned with the ruckus her cleavage- and butt-teasing fashion choice caused, she explained via Twitter, “My dress for the Australian Open has been one of my best designs ever! It’s all about the slits and V-neck.” By the way, Venus made it to the quaterfinals before exiting the championships on Wednesday. Read More: