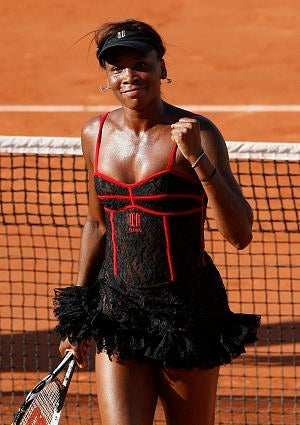 Venus Williams played one of her best games on day one of the French Open in Paris, but it wasn’t her swing everyone was talking about. She wore a lacy corset-like dress with a red trim that gave the illusion of being see-through, causing onlookers to whisper and whistle, according to the Associated Press. Perhaps this was her ode to Parisian style. Williams designed the outfit and says it was “about illusion,” which is her “motif this year.” Her skin-tone shorts at the Australian Open in January also had us talking. What do you think? Was Venus’s outfit too risque for the court?
Loading the player...