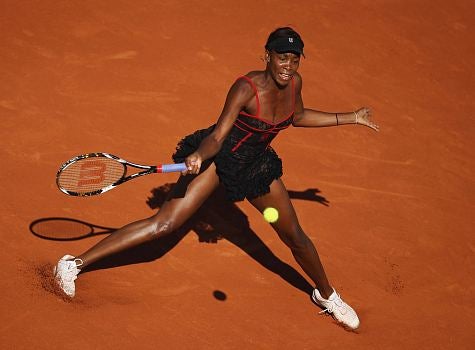 All the talk surrounding Venus Williams’ outfit choice in the French Open last week didn’t stop her from wearing it again while playing several days later. When reporters asked her about the lacy black dress, she responded: “Lace has never been done before in tennis, and I’ve been wanting to do it for a long time.” While she may be playing a great game, the outfit has photographers more concerned with “snapping furiously at every serve” to capture her “skin-tone undershorts” reports the New York Times. The blogosphere is also abuzz with whether or not the outfit is distracting us from her skill as a player. Salon.com writer Tracy Clark-Flory noted: “While photographers were scrambling to get just the right upskirt shot, she whupped her opponent, Patty Schnyder of Switzerland. You gotta give it to her: Williams is maintaining her number two world ranking while dressed for the Moulin Rouge.” Ebony Utley from Jezebel.com thought Venus’s outfit was more of an empowering statement. She wrote: “Black women’s body displays are still very often problematic because of their associations with patriarchy and profit, but as Williams helps us understand, black women are exercising more control over those bodies than they ever have before.” What do you think? Is the outfit distracting us from the game?