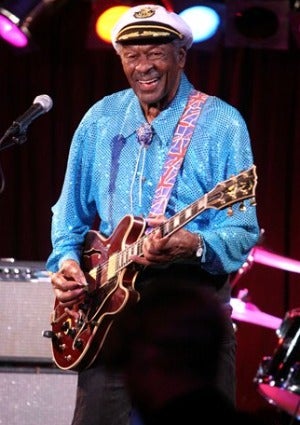 Don’t go feeling down about Chuck Berry. A rep for the legendary “Father of Rock and Roll” says he is “good and energetic” after collapsing onstage in Chicago this past weekend.

“He collapsed due to exhaustion, he then came back out to the crowd and did his ‘duck walk’ dance before leaving for the night,” one of Berry’s agents tells CNN.

A local fire department was called to Chicago’s Congress Theater on Saturday after Berry, 84, took a fall, but he refused to go to hospital and opted to return to his home in St. Louis instead.

Like a true showman, Berry thanked the crowd before leaving the stage after his collapse.