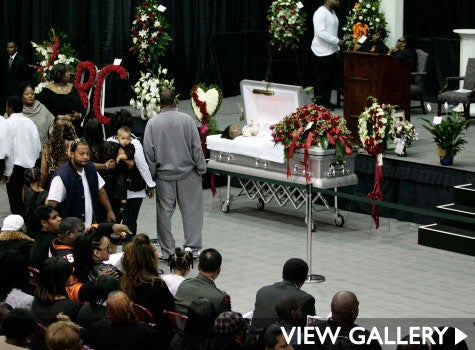 “Can’t nobody know the way I’m feeling right now. No one can explain the relationship that me and Chris had,” Loleini Tonga said through her tears at her fiancee Cincinnati Bengals player Chris Henry’s funeral yesterday. “In six years of knowing each other — through hard times, good times — we loved each other very much,” Tonga said, through her tears. “People say I helped change his life. No. He changed mine.”

Henry’s funeral was held in New Orleans Tuesday December 22 at the Alario Center, not far from where the young athlete grew up. Friends, family and fans gathered to say goodbye to the 26-year-old reciever who is noted for turning his life around after a number of run-ins with the law. The Bengals players flew into the city of brotherly love and took up the grandstand in the facility. All teammates wore black buttons with Henry’s number 15 on them, CBS reported. Wide receiver Chad Ochocinco wore a Chris Henry jersey.

“His future as a husband and a father were important to him,” Goodell said. “He was a young man that struggled, made some decisions that he regretted, but he put himself on the right path. And I’m proud of that. I’m proud of him.”

“The Chris Henry I knew was a good quiet young man, wasn’t a troublemaker,” said Shelley, his high school friend. “That’s what everybody needs to know. He was a good man, a good father.”

Teammate Carson Palmer added, “We’ve all seen and experienced different sides of Chris, and with every side he showed us, we saw just how kind and gentle his heart was.”

Chris Henry will be remembered for his bright smile, his beautiful children, and his efforts to be a better man.

For the latest updates on Chris Henry click here.

Remember the life and career of Chris Henry.