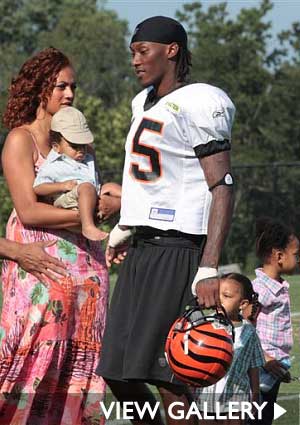 Chris Henry’s wedding to fiance Loleini Tonga may have been the reason for the couple’s argument, reports TMZ. A rep for a North Carolina wedding planner says the couple came in on Tuesday morning to discuss a photographer package, but when shown the bill Henry got an “attitude” and asked Tonga, “How much we paying for this?”

Afterwards the couple is said to have “bickered” about the cost. Henry then went outside while Tonga finished her discussion with the planner.

Meanwhile a neighbor claims Henry begged Tonga–whom he called his “Polynesian Beyonce”–to stop driving the truck or he would kill himself, reports USA Today. “He was banging on the top, on the doors, screaming at the lady, ‘We need to talk,'” said Lee Hardy, a neighbor at Tonga’s parents’ Charlotte home. “He said, ‘If you take off, I’m going to jump off the truck and kill myself.'” Hardy says Tonga stopped momentarily at the end of the driveway, but then she sped off again.

Henry died as a result of his injuries from falling off the truck a few minutes later. He and Tonga have two children, Chris Jr., 2, and DeMarcus, 1.

Read more of our coverage of the Chris Henry tragedy.