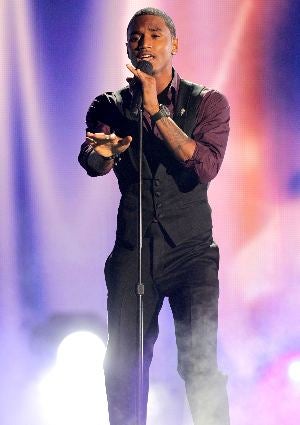 If you were one of the women lucky enough to see Trey Songz live on his “Passion Pain & Pleasure” tour, you may still be recovering from all the sexiness on stage. On the day of his last performance, Trey stopped by radio station Shade 45 to chat with Angela Yee, host of “The Morning After.” Yes, Trey discussed his new album about his growth process, and what it’s like headlining his own tour. Among the fascinating (and sometimes steamy) tidbits… we found out which artists he listens to when he’s having sex: The Isley Brothers and R. Kelly! “[I’m most impressed] when a woman is smart,” Trey told Yee when prompted. He also dished about introducing his mother to Lauren London, who he says he is not dating. In fact Trey says, “I’m very single.” He also touched on the rumors that he’s dating Tamala Jones, after an image of him grabbing the actress’ butt surfaced on the internet. “It was great for the picture and it was a great story,” Trey quipped. “…People will turn a picture to a story and people’s reality is what somebody else says.” In other Trey Songz talk, the singer revealed that although he’s got a song all about sexting, “LOL Smiley Face,” he’s never sent any naughty pictures of himself on his phone.