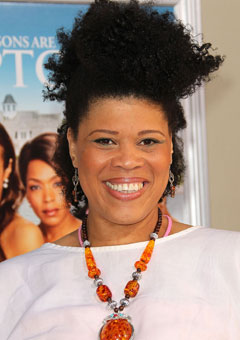 Ever wonder how an actor lands a role in a Hollywood blockbuster? If it’s a film like “Stomp the Yard,” “Notorious” or  “Jumping the Broom,” then Tracy “Twinkie” Byrd had a little something to do with it.

Twinkie, as she is affectionately referred to by peers, has given a face to countless fictitious characters as a casting director over the past 10 years. The New York native says she uses her gut instinct to cast projects, and “Jumping the Broom” was no exception.

She spoke with ESSENCE.com about casting “Jumping the Broom” and how she chose leads, Paula Patton and Laz Alonzo .

ESSENCE.com: What kind of actors were you looking for in these roles?
TRACY ‘TWINKIE’ BYRD: Strong actors. [Laughs] Strong, good actors that’s for sure. We had a tight shooting schedule, so actors that were ready to do the work.

ESSENCE.com: How did you know Laz Alonso and Paula Patton would be perfect leads?
BYRD: You just know, you just have a feeling about it. There are a number of people who could have done either of the roles. But I watched them grow as actors and as people, and I just knew.

ESSENCE.com: What do you hope the audience will walk away with after seeing the movie?
BYRD: That Black love is beautiful. Never give up in the hard times. And we’re all beautiful in our own right. We all have our own experiences and we come with those experiences.

ESSENCE.com: As a casting director, is your job only in the beginning of the movie process?
BYRD: I’m in pre-production until the last person is cast. So, I’m usually there three months prior to the first day of shooting and I continue to work until the last role is cast.

'Insecure' Star Jean Elie Is Engaged! Meet His Fiancée And ...