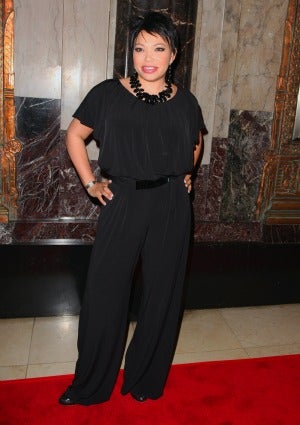 Who can deny that Tisha Campbell-Martin brings the laughs every time? While her resume spans decades — from “My Wife and Kids,” “All of Us” and “Everybody Hates Chris” to the “House Party” franchise, “Boomerang” and “Martin” — her favorite roles are actually off-camera. As wife of fellow actor Duane Martin and mom to two boys, her top priorities are loving up her family and being good to herself.

Most recently, she joined forces with Yoplait to inspire women to eat healthier and be healthier, which, she says, is the ideal partnership. ESSENCE.com caught up with Campbell-Martin to talk family, yogurt and healthy living. The multi-talented actress, who’ll next appear in the kid-friendly TV movie “Lemonade Mouth” and the upcoming series “The Paul Reiser Show,” even cracked herself up a few times.

ESSENCE.com: Congratulations on your partnership with Yoplait! Do you have a favorite flavor yet?
TISHA CAMPBELL: Thank you! Even before Yoplait approached me, I was eating yogurt every single day, so they definitely got the right girl! [laughs] My favorite is French Vanilla and my one-year-old son, Ezekiel, just started eating yogurt, too. He loves Peach.

ESSENCE.com: Your son, Xen, is nine now. How are you shaping a healthy lifestyle for him, and the family?
CAMPBELL: As a family, we all have different [dietary] needs, so I try to be as creative as possible in the kitchen, especially when I’m preparing Xen’s food. He can have his treats, but he knows that he has certain allergies, too. Also, he was diagnosed with autism, so he doesn’t eat gluten or casein.

ESSENCE.com: It’s safe to say that you’re focused on staying healthy, yes?
CAMPBELL: [Being in good] health is really important to me. Right now, I’m [battling] a genetic lung disorder called sarcoidosis, which can go into remission. I’m in Stage II and I’m trying to reverse it. I’ve only got one body and I really want to take care of it by working out and eating right.

It might sound a little extreme, but I work out twice a day — cardio in the morning, then sit-ups and body-strengthening in the evening. Also, my husband runs five miles a day and looks like he’s 25 — he’s 45 — so I’m trying to keep up with him! [laughs]

ESSENCE.com: As a mother of two, what have you learned about losing the “baby weight?”
CAMPBELL: Well, when I get pregnant, I get really pregnant! I’ve also had two C-sections. I weighed 216 after having Xen, but with Ezekiel, I was 270-something — that’s the number I’m sticking to! [laughs]

Once you reach a certain age, I think that how you feel is more important than what the scale says. I’ve actually lost a whole dress size in a month, but I’ve stayed the same, exact weight. So for me, it’s an “inches” game.

ESSENCE.com: Last question — if you were to write a few encouraging words to yourself on the bathroom mirror, what would you say?
CAMPBELL: Don’t be hard on yourself… every day is a win!