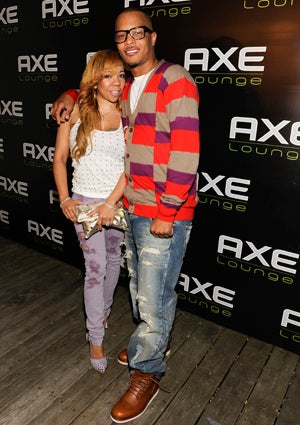 Rapper T.I. is dusting his shoulders off and getting back to doing what he does best: performing. The “Takers” star showed up at an Atlanta nightclub on Friday and performed  an enthusiastic set that included a fierce rendition of “Motivation” from his third album, “Urban Legend,” reports MTV. The performance comes days after, T.I. and his wife Tameka “Tiny” Cottle were arrested in Los Angeles. Reports say officers found a variety of drugs in the vehicle. Meanwhile, Tiny is expressing her gratitude on Twitter, saying she wants to thank everyone for their support, encouragement and prayers. The former Xscape singer wrote on Thursday, “We love you guys.” The newly married star didn’t hold back either when a blogger said she should change her Twitter name to @MajorMethMama, referring to the reports of police finding methamphetamines in the car. Tiny fired back with, “I don’t even no what [methamphetamines]  look like! How about let’s see what the test says.”