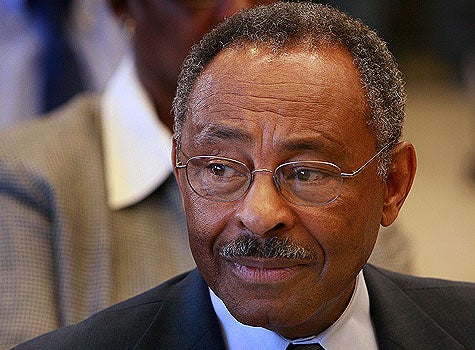 Illinois Senator Roland Burris says he’s through making concessions on healthcare reform. “I’ve already compromised because, you see, I was for a single payer system,” he says plainly from his Capitol Hill office. Now he insists that he will vote against any final plan without a government-run health insurance program.

The Senate’s healthcare reform bill presently includes the public option touted by President Obama, albeit with an opt-out provision for states, but with zero Republican support for the idea and several Democrats opposed to it…its future in the final version is shaky at best. Yet Burris is holding firm. The Chicago politician, who has been shrouded in suspicion since being appointed last December by disgraced Illinois Governor Rod Blagojevich–and recently cleared of legal wrongdoing by the Senate Ethics Committee–finds himself with considerable leverage, as Democrats need every vote they can get.

ESSENCE.com talked with Burris about his year in the Senate, the Democrats’ potentially damaging lack of unity, and why his final vote can’t be taken for granted.

ESSENCE.com: What are your thoughts on the Senate healthcare bill?
ROLAND BURRIS: It’s not a perfect bill, but it has a lot of good parts to it. It certainly carries a public option, but I’m not happy with the opt-out provision. When it’s debated on the floor, I certainly would like to improve it. If we can’t improve that, since the bill has so many other favorable parts to it, then we’ll go along with that. But if for some reason, the public option is amended out then it would not get my vote.

ESSENCE.com: Since you’re not running for re-election next year, you’re seen as having nothing to lose. Without election considerations, your stand could be viewed as political posturing.
BURRIS: This is about my commitment to being a senator; I’m not playing games. I’m not trying to be an obstructionist. I’m doing this because of what my constituents have put forth to me and what I’ve heard, not only in Illinois, but from across the country. I get phone calls, or I’ll be on an airplane, and people say to me, “Senator Burris, stay strong on your position on the public option.”

ESSENCE.com: So, the Democrats have this 60-vote majority in the Senate…
BURRIS: It’s a curse and a pleasure. Meaning, if you don’t come together you can’t do anything with it. But you’ve got it, so you’re supposed to make it work.

ESSENCE.com: Are you frustrated that you haven’t been able to just come together and push through the healthcare reform that you want to see?
BURRIS: I’m not frustrated. I’m sure my colleagues and I will work out a compromise that is in the interest of the people of America. And that’s what we’re going to work on.

ESSENCE.com: How has this year been for you in the Senate, considering it was a pretty rough road for you to get here?
BURRIS: It was not a rough road. That’s all water over the dam. I’ve had a great time. I’m a United States Senator of the great state of Illinois, participating in all of these major issues coming forth, and I’m enjoying it.