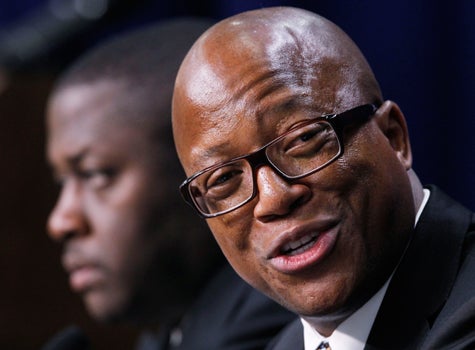 There’s no doubt that African-Americans continue to be disproportionately affected by HIV and AIDS. We’re just twelve percent of the population, yet we account for more than fifty percent of new infections. But it turns out that race isn’t the only high-driving factor for the epidemic in the Black community. On Monday, the Centers for Disease Control and Prevention (CDC) released a study of over 9,000 heterosexual adults living in high-poverty areas of 23 cities nationwide. One of the findings: HIV prevalence rates in urban poverty areas did not differ significantly by race or ethnicity. In short: Unlike the general population, if you’re in a poor, inner-city neighborhood, the color of your skin makes no difference in terms of your risk. We asked Kevin Fenton, M.D., Ph.D., (pictured) director of CDC’s National Center for HIV/AIDS, Viral Hepatitis, STD, and TB Prevention, to give us some insight into what the study means. ESSENCE.com: Bottom line: Is the study saying that the high rates of HIV in African Americans are due to poverty, not race? KEVIN FENTON: No. A better bottom line would be that poverty is a factor which is driving the high rates of HIV that we’re seeing in African-Americans and other minorities in our inner cities. We know there are individual factors: for example, high rates of unsafe sex, injection drug use, having multiple concurrent partners, high STD rates. We know there are health system factors, for example, poor access to quality services. And then social determinants of health which drive vulnerability to the epidemic, including poverty, cultural factors, racism, discrimination, poor education. This study confirms that poverty is a strong determinant of HIV rate and risk, particularly in the inner cities of the U.S. ESSENCE.com: Is the implication that wealth may protect you from HIV? FENTON: Not necessarily. In fact, in the very early days of the epidemic, wealth was a risk factor for HIV because with wealth you were able to travel, you were able to move between cities that had high incidence of HIV, or you may have had resources to participate in risky activities, for example, purchasing sex. In some societies, wealth may be associated with having multiple concurrent partners. You have more money, so you’re more socially desirable. But clearly what this study is saying specifically in the U.S. context is we can show that poverty is an equalizer in these inner city areas. If you’re poor and Black, your rate of HIV is equal to if you’re poor and Hispanic is equal to if you’re poor and White. ESSENCE.com: Seventy-seven percent of the people in the study were Black and only four percent were Caucasian. Were you at all concerned about comparing such a small group of Caucasians to such a large group of Blacks? FENTON: No, because it reflects the reality of inner city life in the United States. And statistically we have enough in each cell to do the comparison. ESSENCE.com: Are there assumptions about why poverty is driving HIV? FENTON: We’re working the causal pathways. If you’re poor, you may have to participate in transactional sex [selling sex] to survive. We know that in poor parts of the country we not only see high rates of HIV but also high rates of STDs and those are co-factors for HIV. Poor areas also have high rates of injection drug use and other types of risk behaviors. Poverty is also related to quality, location and access to health services. In poor parts of many cities, community health centers, quality of private doctors are all going to be factored into increasing vulnerability to HIV. ESSENCE.com: I know the results can’t be generalized to non-urban poverty areas, but is that something you might look into later? Other socio-economic strata? FENTON: Absolutely. This is one of the things we’re committed to looking into at the CDC. We have a very good handle on those individual level determinants I mentioned earlier. We have a less good handle on the social determinants of health. So, for example: How is poor education attainment driving the epidemic in the U.S.? How are high rates of incarceration driving the epidemic in African Americans. This [poverty] study is one of a series of studies we’re doing at CDC.