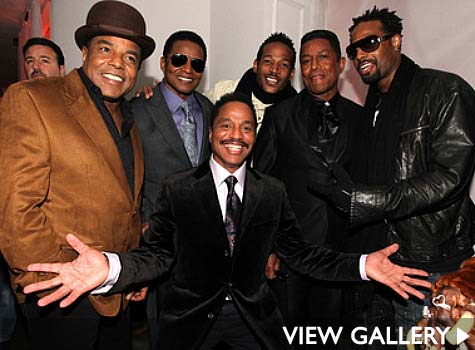 According to the LA Times, The Jackson brothers’ “The Jacksons: A Family Dynasty” is more about the brothers journey to reclaim their fame and less about them coping with their superstar brother Michael’s untimely death. The show, which begins airing this Sunday, features Jackie, Jermaine, Marlon and Tito Jackson prepping for and going on their reunion tour. Before his death Michael was supposed to make some appearances on “The Jacksons” and possibly join his four older brothers during some performances.

“‘The Jacksons’ does have the benefit of bygone celebrity, which the producers milk with many old photos and clips, and an actual narrative: The brothers are coming together not only for this reality show, but also to produce an album that will, they hope, rekindle the Jackson sound.

If Michael were still alive, the show would no doubt be fueled with the tantalizing possibility of an appearance by him, which, of course, would have never happened. But he died shortly after filming began, and “The Jacksons” became something else entirely: another grim example of the siren call of reality television,” the article reads.


In regards to MJ’s passing, the brother are not jumping to conclusions about whether or not Dr. Conrad Murray should take responsibility. “It’s ‘premature to point fingers and say who did what,'” Tito Jackson said, at an event for their upcoming show, according to E!.

We can’t say whether the documentation of their tour is noteworthy yet, but like any reality TV show about superstars “all grown up”, we’re interested in watching these international megastars who never had a “real” childhood go through life’s challenges in their own extraordinary reality.