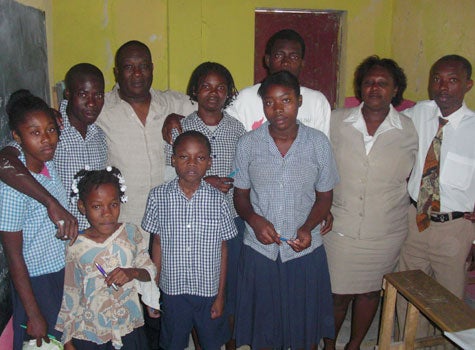 As a boy, Yves Joseph loved playing soccer. The middle fielder enjoyed helping his team score a goal. “I felt like a football quarterback.” He says. “Soccer was the sport in Haiti, I wanted to be a professional player.” The game provided a welcomed distraction from the world outside. His native land was littered with political destruction, along with a growing poverty rate. When he went to high school his focus shifted. In 1968, Joseph tagged along with a band called Tabou Combo. He admired the gifted artists from afar. It was not until one of the original members left that Joseph had an opportunity to join the group. “I started writing lyrics, even though I was not a player,” he says with a smile. “Then a Conga player left and I took his position.” The ambitious man never stopped playing. For 40 years, he has successfully toured the world with his group from the Caribbean to Asia, Europe, South and North America. Along the way, they were able to collect many awards ranging from best album for Haitian dance music to topping European and Caribbean charts for six consecutive weeks. Tabou Combo has audiences around the globe and are acknowledged throughout Haiti. Fast forward to the early evening of January 12, 2010. Joseph is at home getting ready for work. He takes a few minutes to check on his flight to Haiti, which is set for the following Friday. The phone rings. His friend shares with him that there has been an earthquake in Haiti. Joseph shrugs it off. “When I was 6 or 7 years old, there was an earthquake but it was for a few seconds. I didn’t think anything of it,” he says. The phone rings again. The same friend, this time with a demand. “He tells me to turn on CNN.” Joseph explains, “When I saw the images, that’s when I realized the magnitude of the quake.” A fierce 7.0 earthquake hit his birthplace: buildings were not crumbling–they were destroyed. Wide areas did not have power. People were dispersed everywhere. A nervous Joseph dialed family and friends with no luck. The stunned man turned to what was familiar to him: the recording studio. “First I had to find old songs that spoke to Haiti,” he says. “I had recorded songs in the past about the political turmoil in Haiti so I wanted to find a song that was specific to what was happening now.” During the interview Joseph changes his focus.  “I owned a store in Haiti…I had three employees.” His eyes scan the floor. “Marielaure Clermonte…she was 27-years-old, going to culinary school.” Paramedics found her alive underneath the rubble the Sunday following the quake, but she died not long after. “Such a good girl,” he adds,  “and very ambitious.” The 5′ 9″ man leans back in a soft black leather chair, looks down and bends his head. “You know what? I also built a school in Haiti. The kids were all safe.” He adds, “the school was designed for underprivileged kids. I wanted them to learn how to read and write.” He fiddles with his iPhone laying on the table. “It took me 22 years to build that school and 32 seconds to lose it.” Joseph finds peace in his music. “After I learned about the earthquake, I went into the studio and re-recorded a song from years ago,” he says. The song is called, “Haiti Will Never Die” because it’s true, Haiti will never die.” Listen to Yves Joseph’s song here, “Haiti Will Never Die” To read more about Yves Joseph’s band, “Tabou Combo,” click here. How you can help the people in Haiti. For the latest on the Haiti earthquake, click here.