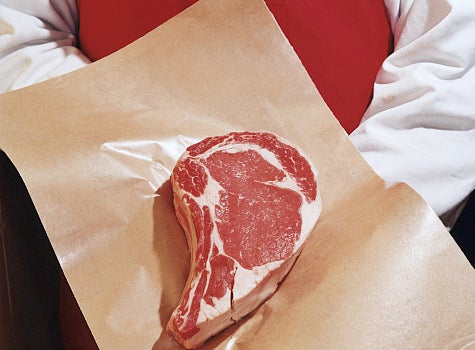 Call it a trend, or call it primal instinct, but diners across the country have gone whole hog for nose-to-tail cuisine. Intertwined with the local and sustainable food movement, farm-raised meat is getting star treatment at restaurants across the country and inspiring a new generation of boutique butcher shops along with it. Phrases such as “grass-fed” beef or lamb, “heritage” pork, and “cage-free” chicken indicate a more ethical way of raising livestock as opposed to factory slaughterhouses. Absent of steroids, corn, antibiotics and other fillers, meat grown on local pastures also provides a leaner, more flavorful dining experience.   In San Francisco, meat cleaving has hit a fever pitch–butchers such as Ryan Farr, named a “culinary rock star” by The New York Times last summer, draw capacity crowds at butchery demonstrations. Onlookers gather at Bloodhound Bar as Farr cleaves whole goat or pig carcasses before them, and then the fresh cut meat is grilled and paired with wine or cocktails.  In New York, butcher Pat La Frieda’s name has become synonymous with farm-raised meat since Mario Batali turned to him to source meat for all of his restaurants in the ’90s. La Frieda’s ground beef is used at the wildly popular Shake Shack burger chains and his prime dry-aged cuts go into the Black Label burger at Minetta Tavern, which gets rave reviews despite its $26 price tag.   And last year, Washington, D.C., chef Robert Wiedmaier opened The Butcher’s Block in Alexandria, VA., next door to two of his restaurants: Brabo and the more casual Brabo Tasting Room. The butcher shop also supplies his restaurants across the Potomac in Washington, Marcel’s and Brasserie Beck.   Once a month, The Butcher’s Block hosts free, one-hour butchering workshops at the store for up to 40 people, explaining how to de-bone a whole chicken, for instance, while giving a wine tasting at the same time. From soup bones to ready-made picnic baskets, the offerings at this butcher shop are a prime example of how farm-fresh goods are thriving in the new era of conscious dining. Read More: