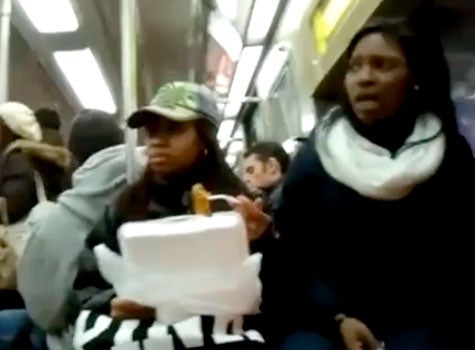 A new viral video depicting a skirmish between two Black teen girls and a White woman has surfaced on the net. The clip, which was filmed in Brooklyn, shows the 30-something woman harassing the young girls for eating on the train; without any obvious provocation, she calls them “animals” and “idiots.” The teens return fire with a slew of insults about her weight and by calling her a few different kinds of b*tches. The White woman continues with her harassment, telling the girls they will end up in jail and even goes so far as to swell up on one of the girls as she prepared to get off of the train. As the subway jerks, the girl accidentally bumps into the woman, who then shoves her back. Unsurprisingly, both girls then proceed to fight with the passenger until they are broken up by a male bystander.

As a Brooklyn resident, I know how loud and obnoxious our little sisters can be on public transportation; until someone comes forward, we have no way of knowing what happened prior to the filming of the clip. However, I’ve also addressed many kids about their bus and train behavior without resorting to calling them animals or idiots. As much as I hate to see two pretty Black girls cursing like sailors, you can’t blame these two much, considering how hard the woman went off on them for no apparent reason. Furthermore, it was disheartening to watch the other passengers on the train gawk at the girls without stopping to defend them in the face of an older troublemaker who should have known better.

A Black man seated nearby attempts to calm the girls down early in the clip, yet makes no move to chide the woman for insulting them. He’s also the one who breaks up the fight, placing himself between the teens and the woman as if he’s charged himself with protecting her. Yet, no one was willing to step up to the woman and say “Would you leave these kids alone?” While it is possible that the girls had insulted the woman prior to the filming of the tape, it’s still unlikely that they had done something so over the top that could have provoked such a reaction. Ultimately, no matter what it is they may have said, they were teens and she was an adult; she had the responsibility to keep the situation under control, but instead chose to behave like a child herself.

I am so relieved that a police officer was not present for this exchange, as I fear a cop would have jumped to protect the woman and blame the kids just as the man on the video did. Are folks just so accepting of the loud, crass Black female stereotype that they are willing to assume them guilty before asking for evidence? And what emboldened this adult woman to address them in such a manner? The whole incident — from the woman’s bizarre provocation to the refusal of other most passengers to intervene — speaks to a level of fear that many folks have of Black teens. Two girls who had done little else but be rude enough to eat Chinese food on the train very well could have gotten in a lot of trouble over this incident.

We have to take a proactive approach when it comes to correcting the behavior of our young people; we also have to do better about having their interests at heart and working to protect them. If you see a kid on the train acting up, more often than not, you should feel comfortable using polite words to attempt to correct them. It’s also imperative that our youngsters realize how many people out there resent them despite having never met and that there are an unfortunate number of folks who do see them as little more than animals. They should also be able to feel like some grown-ups will have their back when they need it. I wish the girls on the tape could say the same.