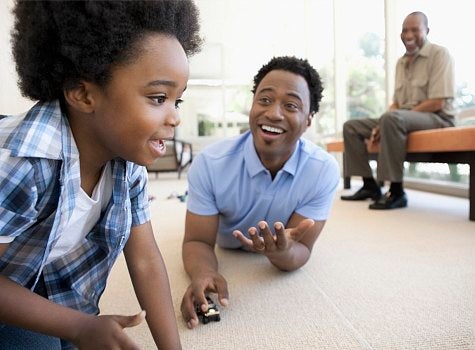 Deadbeat dads always make for salacious news, but they just might be overshadowing the growing trend of non-resident fathers who are making an effort to stay involved in their children’s lives, reports USA Today. Pennsylvania State University sociologist and demographer Valarie Kong researched changes in father-child contact trends and found that today’s fathers are spending more time with their children than they did 30 years ago. Thanks to changing custody laws, more opportunities to communicate (texting, email) and “changing attitudes” about fatherhood, the amount of fathers having no contact with their children has decreased from 37% in 1976 to 29% in 2002, says Kong’s Penn State colleague, Paul D’Amato. The 50% of American children who don’t physically live with their father won’t necessarily be fatherless. D’Amato’s research, based on survey reports from 5,200 mothers with children ages 6-12, found that 38% of non-resident dads were “highly involved” in their children’s lives and 8% showed growing contact. The highly involved dads were often those whose children were older at the breakup and were more likely to have been married to the mother. “I think men are saying ‘Enough is enough. I’m not just here to pay out money. I love my children as much as their mom does and I recognize that I am as important in their lives as their mom is,'” said Karen Stewart, author of divorce book, “Clean Break.” Though the report shows positive growth, there is still room for improvement. The moms surveyed reported growing father-child contact, but it wasn’t to the level they desired. They reported 32% percent of the dads as being rarely involved and 23% showed a pattern of declining contact. Despite 56% of African-American households being headed by single mothers, the Philadelphia Inquirer recently reported on research that found that “African American fathers, more than any other group, are more likely to maintain lasting relationships with their children when they don’t live with them.” Contact with dad also affects a child’s happiness. A new study conducted by the Children’s Society of Great Britain found that bonding with dad on “most days” makes children happier than their fatherless counterparts. On a happiness scale, children in the study rated themselves 87 out of 100. What’s been your experience?