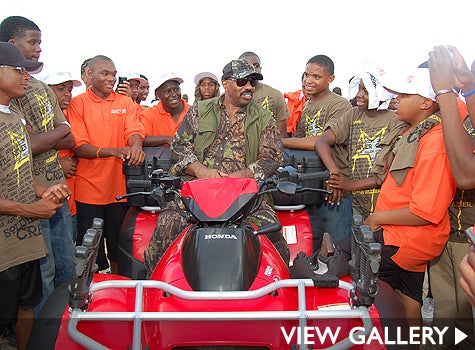 Steve Harvey is giving back and helping young men rethink their future. The comedian and relationships expert hosted his second annual Mentoring Weekend at his Dallas ranch on Father’s Day. Two young African-American boys who participated in the inspiring program shared their experiences with ESSENCE.com. Dalonte Hall, 18, knew he needed a change in his life so he was optimistic when he hopped on a bus from Detroit to Dallas to attend Steve Harvey’s 2nd annual mentoring weekend. Hall was looking for hope after witnessing his father’s killing, his mother’s death and trying to turn his young life around after spending a year in jail for drug possession. Hall says the weekend was one of the best choices he’s ever made. He explains: On his personal life “My mother died from cancer when I was three. It was hard seeing her on her death bed as a vegetable. My dad was not really there in my life. He was a big-time drug dealer in Detroit. He would come home to put food on the table and clothes on me and my brother’s back. When I was 13, he was killed in front of me. That broke my whole family apart. My grandmother Connie, God bless her soul, she tried to do the best she could. She took custody of me and my brother. We did not have much money so we had to do what we had to do.” On what Steve Harvey shared with him “Steve told me about the importance of having a friend in my life. He also advised other guys to get someone that they can talk to because life is hard without a friend. It makes sense too because I know boys who don’t like talking to their moms about certain things. You know, some stuff you gotta tell a man.” On what he hopes other kids learn “Life is all about choices. The choices you make depend on how you live your life. Even though you may not have a father in your life that should not make you go out and do illegal things. Go to school, find a mentor. Just stay motivated.” On his goals “I am going to community college to get an Associates degree. I have to take my basics then I am going to a university. I want to become a dentist because I love to keep my teeth pearly white. [laughs] I want to teach kids how to keep their mouth clean because some of them don’t like to brush their teeth.” Jose Garcia, 16, shares how he learned to deal with his anger towards his drug-addicted mother and touches on the loneliness he felt as a child when she left. Here he shares what he learned from Steve Harvey: On his personal life “Last year, I was lost. I did not know where to go or what to do with my life. My mom was on drugs. I would visit her on the weekends and she would not show up. I just felt alone without her. One time she went crazy, she came to the house and started beating me up. It was hard for me because that is when I lost a lot of respect for her. I still struggle with forgiving her and have not forgot about that time.” On what Steve Harvey shared with him “Mr. Steve Harvey told me that it is good to forgive. He taught me how to respect and honor my mother. I am still working on that. I am not a man yet, but I learned about the way a man should be from Mr. Harvey.” On what he hopes other kids learn “I told them it is an honor to be at Steve Harvey’s ranch and that they should all be smiling. And don’t give up because there are still people out there that care.” View photos of the weekend experience
Loading the player...